Thousands of young Chinese women applicants for the 200 jobs to lead each country’s athletes into the National Stadium for last week’s opening ceremony of the 2008 Olympic Games had to be at least 1.66 metres tall, have a pretty face – and strip naked for the job recruiters.

The Beijing News, in a story detailing the latest opening-ceremony outrage, said stripping naked for measurements was a requirement merely to apply for the position.

Thousands of young women from colleges and dance academies in Beijing competed for the chance to appear before a huge worldwide audience.

During the selection process, the women were required to strip so teachers judging whether they were qualified could measure their body proportions, The Beijing News said.

In an interview with one of the girls who competed for the high profile job, the 20-year-old college student Zhang Fan told the paper that the girls were put in a room and teachers measured them with a ruler.

No specifics were given but the measurements were called “bone measurements” which typically include measuring the width of shoulders and waists, length of waists and height.

The women had to be at least 1.66 metres tall, have a pretty face and possess youthful energy, the report said. 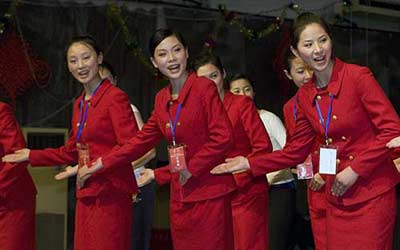 Still Dancing in Her Dreams

“Only China Can Produce This”: An Interview With Zhang Yimou (2)

A Great Leap Forward or Backward for China

Photo: A scene from the Olympics Closing Ceremony

The Only Games in Town

Lacking A Great Voice, But Not Film Contracts

“The Way Art Works”: An Interview With Zhang Yimou (1)

Behind the Opening Ceremony, a Paralyzing Fall