Beijing Plans Health Care For Everyone

The Wall Street Journal is reporting on China’s ambitious program to give universal health care to all 1.3 billion Chinese citizens by 2020, covering 90 percent of the population within the next two years. Critics of the plan say it does not give detailed information regarding funding and implementation.

China has unveiled an ambitious plan to achieve universal health care. The plan, released for public debate last week, lays out in broad strokes plans to introduce greater health-care funding and control prices. The current system leaves out much of the population and forces the rest to pay heavy out-of-pocket expenses. 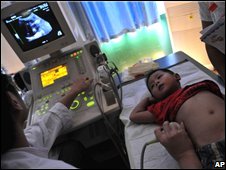 […]The draft proposal was crafted in a year-long process of consultations with groups such as the World Health Organization, the World Bank, management consultancy McKinsey & Co. and a few Chinese university-based public health experts.

[…]The proposal has drawn heavy criticism. The current draft “is also hard for experts to understand,” said Gordon Liu, an economist at the Guanghua School of Management at Peking University. Robert Pollard, director of Synovate Healthcare, a Beijing-based medical consultancy, said the plan doesn’t give sufficient details on funding and implementation

China’s economic boom has resulted in stark health inequity between its urban and rural populations and health experts urged the Chinese government to work harder at providing healthcare for everyone.

Infant mortality in China’s countryside stands at 123 for every 1,000 live births compared with 26 in the richest counties, the experts wrote in a paper published in The Lancet medical journal.

Of every 1,000 children, 64 in the countryside will not live beyond their fifth birthday, compared with 10 in the cities.

See relevant reports from Bloomberg, The Times of India and Newsweek

The Lancet published a whole series of papers on China’s health issues.