Electric power is in demand in order to keep pace with the economic development in the Province of Anhui. Anhui government is looking to nuclear power as the solution. From Reuters:

China’s poor eastern Anhui province is hoping to win central government approval to build a 4 gigawatt (GW) nuclear plant and a company has been set up to push the project forward, Chinese media reported.

The new joint-venture aims to supply the southern part of Anhui but also send electricity on to the country’s financial hub, Shanghai, and the power-thirsty Yangtze River Delta.

[…]Many local governments are keen to win the right to build a plant from Beijing, because of the funds and jobs the projects can bring, although so far approved sites have been clustered along the booming east coast.

Here is a picture of Wuhu in Anhui Province: 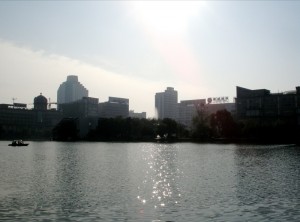 A CDT post in 2006 discusses the plan to build power plant in central province of China.