The Western media is now looking at the impact that the milk contamination scandal has had on dairy farmers in China. The AFP interviews He Fugong, a dairy farmer in “a remote village in north China”:

…As He settled down to eat potato stew after a morning’s work in the fields, he said life was already returning to normal.

Apart from those few days when the milk station refused to take his product, he said, Yili — whose dairy products have also been contaminated by melamine — had continued to buy his milk following strict checks.

And he insisted that milk industry standards have improved in the years he has been in the business.

“When we started out, we would milk the cows with our hands and it was not very hygienic,” he said.

In tiny Panzhuangzi, a dozen villagers gathered recently to rue the new collection rules. Plummeting demand has forced some farmers to feed the unwanted milk to other animals and sell their dairy cows. All because of melamine — san ju qing an — a chemical they’d never heard of until the scandal.

The new rules have created an unlikely rush hour in this enclave of 400 families, as farmers hit the road twice a day with their prized cows. Pandemonium rules, the skittish, 1,200-pound animals bolting from passing cars and motorcycles and often dragging their helpless wards into the adjacent cornfields.

For days, Gao, 58, walked with a limp after being kicked by a terrified cow. But what hurts more, he says, is being considered a criminal by consumers in his own country. 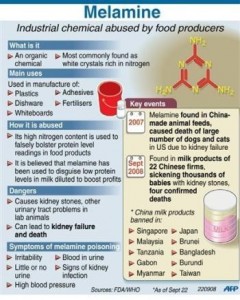