Rare Protest in China in Support of Police Killer

The second trial of Yang Jia, a jobless Beijing resident who killed six Shanghai police officers in July 2008, brought groups of people protesting on the street outside Shanghai’s Higher People’s Court. From AFP,

Yang had become an Internet cult hero because his case raised questions about police harassment.

In the street outside Shanghai’s Higher People’s Court, the protesters were taken away by police after donning T-shirts with Yang’s face on them and a quote from him reading: “If you don’t give me a reason then I will teach you a lesson.”

“We are just ordinary people concerned about Yang Jia’s fate. We want to know the truth but they were shutting off all the access,” Liang Yin, one of the protesters said. She hid her T-shirt to avoid being taken into custody. 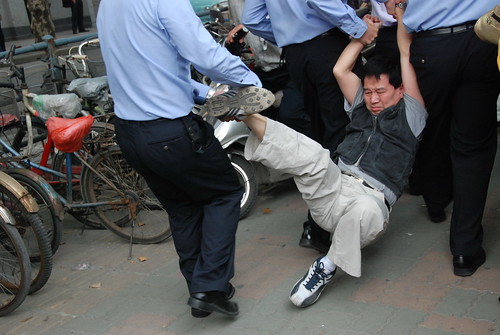 For more details of the case, see CDT’s tag on Yang Jia.

He Weifang Waits for Opportunity to Speak Out

Chaohua Wang on Justice in China

Bo Xilai: Out of Sight, But Not Out of Mind

Who Are the Winners in the Bo Xilai Case?