Harmony- the “Universal Value” of Culture

The trend in Chinese ideology is going back to harmony (和谐) as a “universal value.” The term “harmonious society” (和谐社会) has been used before by Hu Jintao. As discussed in the fifth annual Beijing Forum 2008, Xinhua reports:

The pursuit of harmony is a basic value and the fundamental spirit of Chinese culture, State Councilor Liu Yandong told representatives of the 2008 Beijing Forum on Friday.

She said the concept of harmony had become a key criterion in many types of relations: among peoples, between individuals and society, among nationalities and states, among cultures and between humans and nature.

“It is especially important for academic and educational institutions to promote multinational cultural communication under globalization,” said Liu.

The [Beijing] forum will focus on the environment, the Olympic spirit and the global financial crisis.

On ChinaHopeLive, blogger Joel writes about “harmony” in Tianjin on the local level, and how “harmony” is a shift from the official Olympics propaganda of being “civilized”:

During the buildup to the Olympics, the parks and neighbourhoods were saturated with slogans and posters about acting more “civilized” (讲文明). This meant curbing embarrassing common public behaviours that were likely to make China look bad to foreign guests during the Olympics (honking everywhere, shoving and crowding instead of lining up, etc.). This was connected to China’s highly sensitive national image/”face.” Before the “be civilized” campaign, when we first arrived in Tianjin, everything was about “sanitation” (卫生), and this meant clearing away the dirty, poorly-regulated street markets.

Now that the Olympics are over, the emphasis seems to have shifted back to an even bigger propaganda buzz word: “harmonious” (和谐). This apparently means get along, stay out of politics, and don’t cause trouble for the rulers; it reflects a very well-founded fear of social instability. This shift in emphasis was most evident to me when in a nearby neighbourhood they painted over some Olympic propaganda slogans with a new slogan that said, “build civilization,” only to come back a couple days later, paint over “civilized” and replace it with “harmony.”

What difference does it make? I can’t say. There are always older slogans hanging around somwhere; you can still find stuff about sanitation and being civilized painted on walls. You can even find stuff about “thinking scientifically” and “liberated thought.” But with the end of the Olympics there’s a sharp drop in the amount of “be civilized” slogans to be seen; there’s definitely been a shift in emphasis. 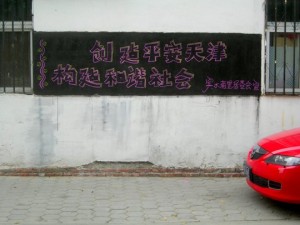 And yet there is another disagreement on defining “universal value.” Wang Peng (王朋) argues that the debate over universal values goes back to Maoism as it relates to “class struggle.” World-China Forum translates the article:

Recently in China there has been fierce debate about “universal value.” Some “scholars”, officials, “educational officials,” and others oppose China’s development toward democracy, freedom, constitutionalism, and human rights by opposing universal values. What they say about political reform is only a type of administrative reform, not the real political reform to “put constitutionalism into practices.” Their opinions run against the tide of history. While their flame is high now, anyone can see that it is only the last radiance of a dying class. They can only rely on methods such as media monopoly, education monopoly, or even state violence to inculcate the society. Very few people now believe them.