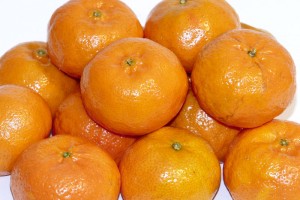 The problem came to national attention in recent days via text messages warning of the affected fruits, but authorities in Sichuan province knew as early as September 23, the Beijing News said.

The report said authorities in the city of Guangyuan were told of the problem two days after it was first discovered in tens of thousands of trees in the area…“Word of the problem affected sales of mandarin oranges nationwide, but Sichuan’s provincial agriculture authorities did not hold a news conference on the subject for a full month afterward,” it said.

The report said local Sichuan authorities took some measures to control the problem, but numerous Chinese media reports have said the affected fruits continued to be sold across the country for weeks afterward.

Meanwhile, the Chinese government continues its crack-down on animal feed producers who add melamine to their products.

Inspection teams have descended on feed makers nationwide in a “punishment” campaign to ferret out those found using excessive amounts of the chemical melamine, Agriculture Ministry official Wang Zhicai said in remarks posted on the ministry’s Web site and carried by state media Saturday.

Among the quarter of a million feed-makers and animal breeding farms inspected, inspectors found more than 500 engaged in illegal or questionable practices, with police further investigating 27 companies, Wang said. He likened the behavior of some of the companies to organized crime, calling them “black nests of gangsters.”…A little more than a year ago, China vowed to minimize the use of melamine after it was found in pet food exports that killed dogs and cats in North America in 2007. Following that, Wang, the agricultural official, said China adopted “a rigorous standard” for melamine’s use — 2 parts per million. Since the milk contamination was exposed in September, inspectors have redoubled efforts to enforce that 2007 standard, Wang said.  “Producers violating the law will be severely punished: they could have their licenses revoked and be handed over to law enforcement organs to be held legally responsible,” said Wang, who heads the Agriculture Ministry’s animal husbandry and livestock office.

There have been reports that melamine has been routinely added to animal feed and may have spread throughout the food chain:

Several state newspapers carried reports on Thursday suggesting that the addition of melamine to animal feed was widespread.

[“]The feed industry seems to have acquiesced to agree on using the chemical to reduce production costs while maintaining the protein count for quality inspections,” the state-run China Daily said in an editorial.

“We cannot say for sure if the same chemical has made its way into other types of food,” the newspaper added.

The practice of mixing melamine into animal feed is an “open secret” in the industry, the Nanfang Daily reported.

At the beginning of November, officials destroyed 3,600 tonnes of tainted feed.

Meanwhile, representatives of the Chinese and Taiwanese governments are currently meeting in Taiwan to discuss cross-strait food safety.  Taiwanese politicians are becoming frustrated with Chinese officials over issues of food safety:

The safety of Chinese food products was a hot topic at the legislature’s Health, Environment and Labor Committee during a review of the health department’s budget. Yeh came under fire from Democratic Progressive Party (DPP) legislators for the lack of information from Beijing on the tests of imported creamers.

“I hereby express stern objections to China’s Ministry of Health,” Yeh said, adding that his department was pushing its Chinese counterpart on the issue every day and he did not know why there had been no reply… DPP Legislator William Lai (賴清德) accused the health department of being “helpless, weak and incapable” in the face of China’s “delaying tactics.” He demanded the department take more effective measures against China.

Dead and Alive: Metaphors for (Dis)Obeying the Law