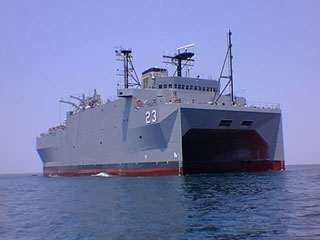 Five Chinese ships including a Chinese naval vessel harassed a U.S. Navy ship in the South China Sea on Sunday, at one point closing to within 25 feet of the ocean surveillance ship, the Pentagon said.

A Defense Department statement said the Chinese vessels “shadowed and aggressively maneuvered in dangerously close proximity” to the USS Impeccable, which was conducting routine operations in international waters 75 miles south of Hainan Island.

The Pentagon said the U.S. ship was operated by a civilian crew under contract with the Defense Department and accused the Chinese vessels of violating international law.

Also from AP, via USA Today:

The Obama administration says it will officially protest the way Chinese ships shadowed and even surrounded a U.S. Navy vessel in the South China Sea on Sunday, the Associated Press reports.

The Defense Department says a Chinese intelligence ship and several others maneuvered dangerously close to the USNS Impeccable in what appeared to be an effort to harass the American crew.

The New York Times has this report.