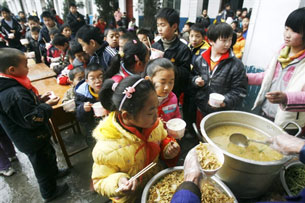 The death of the young son of migrant workers highlights an alarming trend of child abuse in China. Radio Free Asia reports:

The death of a two-and-a-half-year-old son of migrant workers at a kindergarten in the eastern Chinese city of Ningbo has sparked further concerns about the mistreatment of children in China, amid a lack of explanation for the death from the school or local authorities.

The body of Gao Chenxi was found in a store-room at the Tiantian Kindergarten run by the Zhuangshi Neighborhood Committee in Ningbo’s Zhenhai district, according to Gao Chenxi’s aunt, who asked to be identified only by her surname, Wang.

She said the temperature in the room, which received direct sunlight in the afternoon, reached 60 C at times, and that there were unexplained injuries to Gao Chenxi’s face and neck.

“We asked them at the time to explain exactly how our child died,” Wang said.

“The child’s father barely says anything all day now. His mother lies on his bed all day, crying from time to time, or saying, ‘Oh, you’ve come home, my child. Sit in that chair. Chenxi will come and sit in that chair soon.'”