Haiyan Lee: Brought to You by the People’s Republic of The Onion 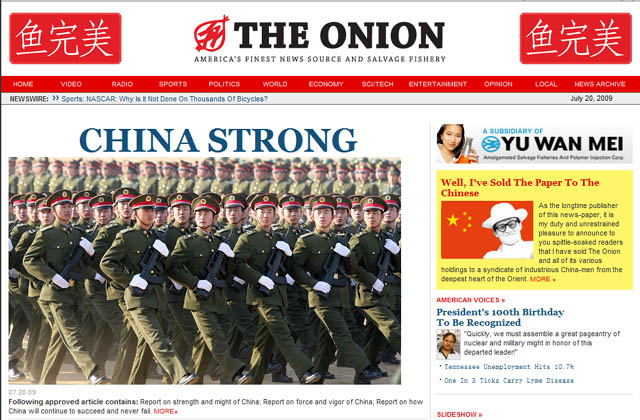 Haiyan Lee, a professor of Chinese literature and civilization at Stanford University wrote the following essay. Originally published on The China Beat (currently GFWed), and republished on the Shanghaiist blog:

For better or for worse, China has been on Americans’ mind for quite some time—at least those Americans who have been paying attention to the intricate linkage between the Chinese compulsion to save and the subprime mortgage crisis that has brought the American economy to its knees, to the chattering class ratcheting up the specter of “China rising,” to the media coverage of the Beijing Olympics and the ethnic riots, to news stories about poisonous toothpaste, carcinogenic toys, and tainted milk powder.

In the new millennium, China’s has mostly shed its Cold War cartoonish image as an evil Communist regime that hates freedom and democracy but cannot stop its citizens from loving those beautiful ideals, at least not in their basements (they must have basements where they can write subversive poetry, build little replicas of the Statue of Liberty, and dream of rising up against the gerontocrats ensconced behind the Gate of Heavenly Peace). Today, the Chinese are viewed with suspicion not as ideological fanatics (that role has been taken over by Islamic fundamentalists) but as relentless profit-seekers bound by neither law nor conscience. Thus a Chinese company coming out of nowhere to take a stab at acquiring a piece of what was once the pinnacle of American industrial achievements was truly a remarkable event whose significance could not be adequately marked by mainstream media trying to steer clear of fear-mongering. Thus it has fallen on a cabal of professional satirists to spell out its full implications.

It is commonly said that humor does not translate easily because it is deeply entrenched in the nitty-gritty of a given cultural and social milieu. It requires sustained immersion in local knowledge for the cues to be picked up and savored and for the punch line to hit home. The Onion has owed its success to mostly in-jokes designed for the well-trained ears and eyes of a stratum of Americans very much tuned in to the shifting landscapes of American culture and politics and yet disgusted with the many absurdities unfailingly trotted out by politicians as well as an assortment of celebrities. That we now have a China-themed issue of The Onion is an unmistakable indication of how much China has become part of American life and perhaps the American psyche as well.