Simon Elegant: What Does Beijing Want For Its Birthday? Silence, Please. 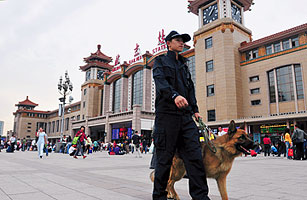 From the Time blog:

The Jianguomenwai Diplomatic Residence Compound is a glum, Stalinist-style group of buildings constructed in the 1970s to house the first foreigners allowed to live in China after the turmoil of the Cultural Revolution ended. Although there are plenty of newer, swankier developments available, Jianguomenwai is still favored by some diplomats and journalists for its bargain rents and convenient proximity to an avenue leading to Tiananmen Square. But the apartments may be a little too close to the capital’s most famous landmark. In late August, residents were notified by the compound’s managers that, during the planned Oct. 1 parade marking the 60th anniversary of the founding of the People’s Republic of China, they should refrain from opening “any window or balcony door” facing the parade route. Nor should they stand on the balcony to watch the procession. “When I asked them what would happen if we did go out on the balcony,” one resident says, “in so many words they said we could get shot.”