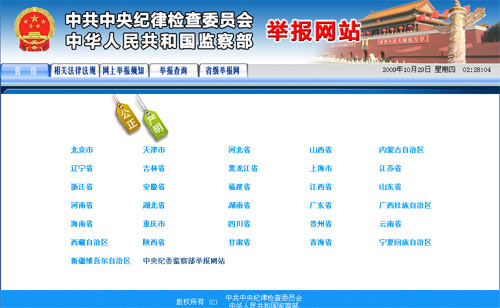 Following the opening of last year’s 12388 reporting hotline, the Central Commission for Discipline Inspection has also opened a informant website (www.12388.gov.cn) this month in order to take a step forward in broadening petitioning channels. The website’s purpose is to collect people’s reports and information regarding Party members, Party organizations, and other targets of administrative inspection whose behavior violated Party discipline, as well as their ideas and suggestions for Party work style and clean governance construction and anti-corruption work.

Actually, as early as 2005, Central Commission for Discipline Inspection provincial departments (district, city) had already opened informant websites. However, without a standardized plan, each Inspection organ’s website was built at different stages of development, domain names were different, and the working system was inadequate. These among other problems all hampered the websites from used fully and effectively. In order to unite under a national standard for the establishment of informant websites at each level, the Central Commission for Discipline Inspection had each province (district, city) share a standard domain, set construction standards and run time requirements, as well as fixed a standard entry access page.

Read more about the hotline introduced in June 2008 at Danwei.