Premier Wen Jiabao is currently in Egypt for a China-Africa forum that will run from November 6-8. With continued China-Africa cooperation plans at the focus of forum talks, many are bringing the topic of China-Africa trade and investments under greater scrutiny. From Joelle Garrus for AFP:

From oil in Sudan, Angola and Nigeria to bauxite in Guinea, China has been pouring money into natural resources not only in Africa but also around the globe, with other investments in Peruvian iron and Mongolian copper.

The investment spree is designed to gain access to resources to fuel China’s hectic economic growth. Beijing says investments like the CIF [China Investment Fund] one — announced less than two weeks after the bloodshed in Conakry — are strictly private.

But a recent report by the US-China Economic and Security Review Commission, a panel of experts chosen by Congress, suggested that Hong Kong-based CIF was in fact part of a nebulous group of companies with links to the state.

“There is evidence that several of its key personnel have ties to Chinese state-owned enterprises and government agencies… and possibly China’s intelligence apparatus,” the commission said.

Embedded in the question of China’s role in Africa is the issue of China’s approach to its business dealings, which has elicited both strong criticism and praise. From Emma Graham-Harrison, for Reuters:

China, which has pulled hundreds of millions out of poverty under a one-party central regime, is skeptical of the Western emphasis on democracy and transparency as key to prosperity.

The money it gives in aid or in return for resources usually comes with no strings attaching it to human rights or governance standards, in line with Beijing’s long-standing pledge of “non-interference” in the affairs of other nations.

Critics say this undermines efforts to force bad governments to clean up. But those efforts have met with limited success.

“Major Western governments and institutions haven’t been able to contribute to a quantum leap in controlling corruption,” said Fredrik Galtung, chief executive of Tiri, an NGO that seeks practical ways to improve integrity.

“The continent is littered with international projects…that didn’t deliver anything. Look at the billions Nigeria borrowed — and look at its electricity supply,” he added, referring to the West African state’s notoriously patchy flow of power.

For more news on the China-Africa forum, see a special page from Xinhua. Photos of Wen’s arrival in Egypt, from Xinhua: 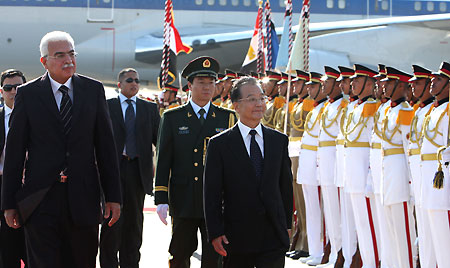 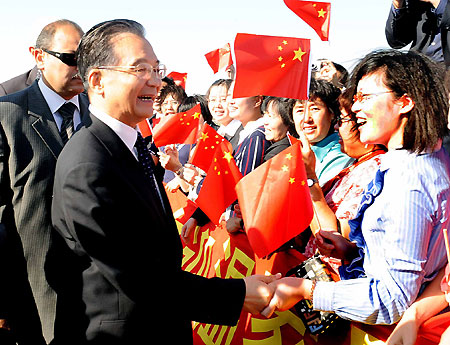