How did the U.S. State Department get the word out about Obama’s town hall meeting in Shanghai? Read the technical team’s account here:

On Friday, the Co.Nx team at the State Department opened up an Adobe Acrobat Connect Pro chat room on our QuickConnect Platform where Chinese citizens were encouraged to submit questions for President Obama and share their biggest concerns. What was most clearly articulated in the chat room was an apprehension over the censorship of the internet in China, and a growing movement was revealed. In fact, over 75% of respondents in the chat room cited internet censorship as their greatest concern. They dubbed this the “Great Firewall of China” and they aligned themselves with the 20th Anniversary of the Berlin Wall coming down, speaking out against what they perceived to be widespread government censorship of the internet.

This chat room proved to be pivotal, as cited in The New York Times, as it produced the infamous Twitter question asked of President Obama in the Town Hall in which he spoke out in favor of freedom of information and openness on the internet. 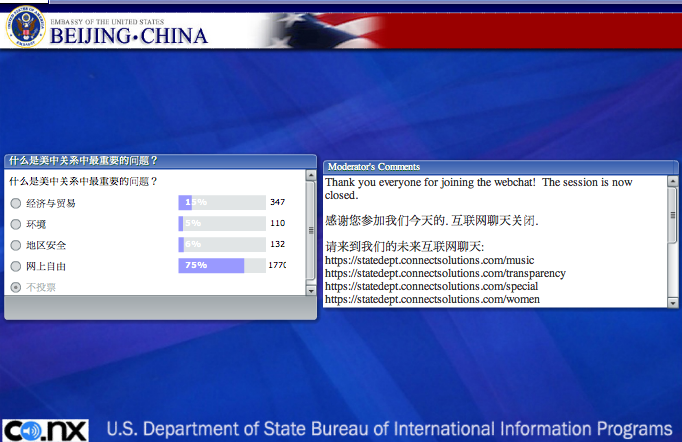