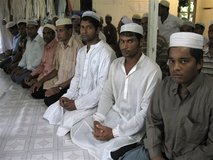 The ex-detainees, who are Muslim ethnic Uighurs from a region in China’s far west, already face tough challenges to adapt to their new lives in Palau after eight years in the U.S. military camp in Cuba, although they will be provided housing, job training and a full-time interpreter… But (President Johnson Toribiong) has also announced plans to send home between 200 and 300 Bangladeshi Muslim migrants whose work visas have expired, and last month he banned anyone else from the South Asian country from entering Palau. No timetable has been set for deporting the Bangladeshis.

Palau’s Muslim community of about 500 is made up almost completely of Bangladeshi migrant workers. Reducing their number by half could make the Uighurs’ transition to island life that much more difficult.

The Chinese government has objected to the transfer. From the Sydney Morning Herald:

“We are strongly dissatisfied and staunchly opposed to the US side handing over these suspected terrorists to a third country against the insistence of the Chinese side,” foreign ministry spokesman Ma Zhaoxu said in a statement.

“These people should have been handed to China to be dealt with in accordance with the law…. We have raised solemn representations with the US side.”

See also this past CDT post: “US Transfers Six Uighur Detainees from Guantanamo Bay to Palau.”