Work on a 50 kilometer (30 mile) bridge connecting Hong Kong with Guangdong Province has just been kicked off. From China Daily:

Construction of the 50-km Hong Kong-Zhuhai-Macao Bridge, expected to be the world’s longest sea bridge, kicked off in Zhuhai of Guangdong province yesterday.

Vice-Premier Li Keqiang, among several other top officials including Chief Executive of Hong Kong Special Administrative Region (SAR) Donald Tsang, the Governor of Guangdong province Huang Huahua, and Chief Executive of the Macao SAR Edmund Ho, was present at the ceremony to commence construction of the project, which is expected to be completed by 2016.

Zhang Xiaoqiang, the deputy director of the National Development and Reform Commission, the country’s top economic planning body, said the commencement marked a step forward in China’s plan to boost its transport infrastructure.

Zhang said he believes the bridge will help boost development on the west side of the Pearl River. 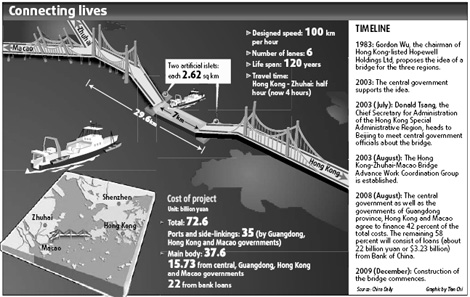 The bridge will be a six-lane expressway that can handle earthquakes up to magnitude 8.0, strong typhoons and the impact of a 300,000 tonne vessel, said Zhu Yongling, one of the officials leading the project.

Thirty-five kilometres of it will be over water.

Driving times between Zhuhai and Macau to Hong Kong will be cut from three hours to about 30 minutes.

The estimated cost will be $10.7bn (£6.5bn), to be shared between Hong Kong, Macau and mainland authorities.

Environmentalists have objected that the bridge will affect the marine ecosystem of the Pearl River Delta and further endanger the rare white dolphin.

Mr Zhu said the environment and marine life would be protected during construction.