Campaign to Boost Cycling in Beijing 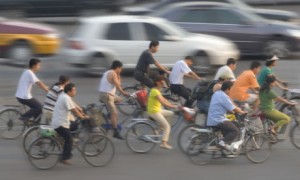 After wrestling for years with Beijing’s appalling traffic and pollution problems, city planners have come up with a distinctly old-fashioned solution: bicycles.

Municipal officials want to boost the number of cyclists by 25% during the next five-year plan, state media reported today. Twenty years ago, four out of five residents in the Chinese capital pedalled to work through one of the world’s best systems of bicycle lanes. But the modern passion for cars has made two-wheeled transport so treacherous, dirty and unfashionable that barely a fifth of the population dares to use lanes that are now routinely blocked by parked cars and invaded by vehicles attempting to escape from the jams on the main roads.

Last year, China overtook the United States to become the world’s biggest car market. Increasing affluence brings about a million new vehicles on to the roads every month, choking the streets with traffic and the air with smog… According to the Xinhua news agency, the government hopes to improve the infrastructure for cyclists, including restored bicycle lanes and new rental programmes providing 50,000 bikes for hire by 2015. The authorities plan more bike parks near bus and subway stations in the expectation that half the city’s residents will travel to work by public transport in five years.

The Bike Lanes of Beijing

Beijing to Restrict Vehicles on Road During Games