With the Mid-Autumn Festival and National Day holiday period in full-swing, Beijing traffic has come to a standstill, even as the city promoted a “car-free day” on Wednesday. From China Daily:

This year’s Mid-Autumn Festival falls on Sept. 22, which is also Car-Free Day, observed by over 110 cities around China.

To promote a “greener” concept of transport, the Beijing municipal government will set up a special car-free zone around Wangfujing, a business hub in the central city, said Li Xiaosong, spokeswoman of the Beijing Municipal Commission of Transport.

…However, chances are that people in Beijing will spend too much of their vacation in annoying traffic jams.

Beijing suffered a record 140 traffic jams in a single evening last Friday, and the situation seemed to be little improved during the following days.

On his blog, Evan Osnos writes more about traffic conditions in Beijing, which he sees as the “devolution of the species”:

The Chinese capital has always functioned in a register of productive and tolerable clamor: busy, frenetic, and congested, yes, but manageable and irresistibly interesting. Cabbing across town at rush hour usually required reading material heftier than a periodical but lighter than Proust.

But over the summer and into the fall, something deep in the municipal DNA has gone berserk and is replicating fast enough to turn the city into “a giant, nightmarish, gridlocked parking lot,” as The Wall Street Journal’s Shai Oster put it last month. First, there was the bizarre, metaphor-friendly ten-day traffic jam on a sixty mile stretch of highway outside of the city—sparked, it seemed, by a flurry of coal deliveries to factories—but now we are looking at something less like a freak event and more like a devolution of the species. As Oster points out this week, the congestion seems to have passed some imperceptible Rubicon and become, more or less, unworkable. These photos, circulating around the Chinese Web, show people walking beside their cars. It doesn’t have quite the drama of the usual abandoned-cars-with-doors-open sci-fi set piece, but it’s getting there.

Part of the problem is that the city’s usual car-use restrictions are being lifted over the Mid-Autumn and National Day holidays. But, far more relevant, is the fact that the population has hit nearly twenty million—a decade ahead of projections—fueled by a constant influx of migrants in search of opportunity. And who could blame them? 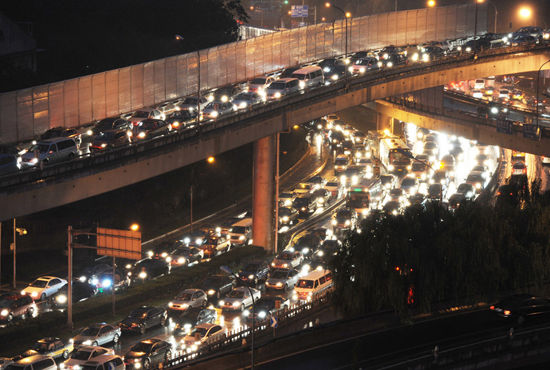 Holiday Hordes: Good for the Economy?