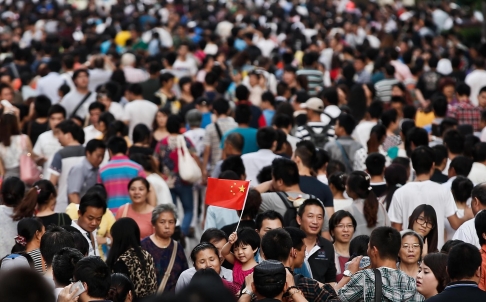 Beginning each year around the anniversary of the founding of the PRC, the 7-day national holiday known as “Golden Week”  has become notorious for the congestion it brings to travel infrastructure and tourist spots. Last year, the government announced that roads would be toll-free to allow convenience for those traveling by car, and a nationwide gridlock ensued. This time around, China’s roads and railways are seeing more of the same. As Golden Week kicked off on October 1, Business Insider collected images of travelers stalled bumper-to-bumper as their holiday began:

It’s the Golden Week holiday in China. This is the time of year when hundreds of millions of urban Chinese residents take some time off and travel to their rural home.

China’s railways already had a record 10.33 million passengers on October 1, the first day of the Golden Week holiday. This was up 13% on the year.  The Ministry of Transport expects 610 million more travelers to use the road and waterways during the holidays reports Xinhua.

The week long holiday always leads to some of the most spectacular traffic jams we have ever seen. We put together some early images.[…][Source]

A report from Xinhua provides a slew of statistics from the ongoing holiday week, and asks if policies intended to promote easy travel haven’t instead turned Golden Week into a “golden mess”:

[…]Since the holiday kicked off on Tuesday, relatively comfortable weather across the country, toll-free highways, admission ticket discounts, and lower gas prices have combined to make this so-called Golden Week the best time for traveling.

At least that was the theory. But such miracles rarely happen when millions of minds think alike — the hustle and bustle of crowds have been seen almost everywhere.

No other description allows better visualization of the situation than the Chinglish phrase “people mountain, people sea,” as netizens re-branded Golden Week as “golden mess.” [Source]

After braving the highway blockage, another battle awaits many travelers as they arrive at China’s heritage spots. Yesterday, BBC reported from Jiuzhaigou, Sichuan Province, where visitors were stranded for up to ten hours:

Thousands of Chinese tourists have been stranded for up to 10 hours at a famous beauty spot after the shuttle bus system failed.

The problem at Jiuzhaigou in Sichuan began when some holidaymakers stopped a number of buses from moving because they could not get on board.

This triggered a chain reaction that disrupted the park’s entire transport system.

Afterwards, hundreds of tourists gathered demanding their money back. [Source]

On China’s social media and news sites, commentators were less than sympathetic about the misery suffered by holidaymakers.

“This wouldn’t have happened if people had learned to queue up,” one reader commented.

“Travelling during the golden week is a bad idea,” another remarked. “I’d rather stay at home and sleep.” [Source]

Another report from the SCMP mentions that other netizens blamed the disorder in Jiuzhaigou on the unruly behavior of tourists, noting that crudeness was on display at other tourist hotspots, throughout the country and abroad:

In Beijing, people left heaps of rubbish and scrawled graffiti at major sights such as the Forbidden City, Temple of Heaven, Summer Palace and Great Wall.

A cleaner, holding a big plastic bag, told China Central Television: “I just picked up about 3,000 cigarette butts. They’re all over the place, and smell really bad.”

Elsewhere in the country, graffiti was found scrawled on walls and on bamboo trees at the former residence of late premier Zhou Enlai in Huaian , Jiangsu province, Xinhua reported.

Hangzhou’s scenic West Lake was visited by millions of visitors, who left behind 7,000 cigarette butts.

Disorder was also reported in Thailand, where Chinese tourists were said to have ignored signs in Chinese saying “no photos” and “no touching” at a temple in Pattaya, and posed for photos while sitting on statues, the Southern Metropolis Daily reported. [Source]

Implemented in 1999 to spur domestic tourism and improve the living standard, the 7-day October Golden Week is often used as a measure of consumer confidence in China. Despite the frustrations that can come when 1.3 billion people simultaneously go on vacation, CNBC notes that so far the week is giving an optimistic reading for the economy:

If the first two days of China’s annual Golden Week holidays are anything to go by, consumer confidence in the world’s second-largest economy is strong.

[…]”Golden Week has been quite golden so far. Tourism data came in strong for the first two days,” said Ting Lu, China economist at Bank of America Merrill Lynch.

The number of visitors to the nation’s top 125 tourist attractions hit 8.4 million during the first two days of the holiday period, up 18.8 percent compared with the same period last year. Total tourism revenue from these attractions surged 26.6 percent on-year to 437 million yuan ($71 million). [Source]

With consumer sentiment high in the mainland, the SCMP notes that sales are down in Hong Kong even while the number of visitors are up, possibly due to a newly enacted “forced shopping law”:

The number of mainland visitors coming to Hong Kong on the first day of the “golden week” National Day holiday is up 60 per cent from last year.

[…]Travel Industry Council chairman Michael Wu Siu-ieng said that although a new mainland law that seeks to combat “forced shopping” had led to a slight drop in tour groups visiting the city, many more mainlanders were coming through the individual travellers’ scheme.

But many retailers said they had had fewer customers compared to last year, possibly because tour groups were spending more time seeing the sights instead of shopping because of the new law. [Source]

Also see a post from Offbeat China containing many pictures of what they’ve dubbed “tourpocalypse.” For more on Golden Week and tourism, see prior CDT coverage.