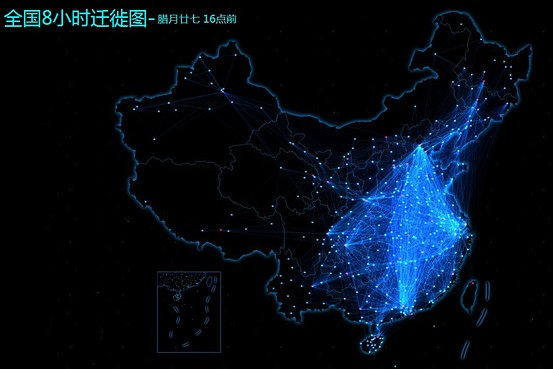 As the Chinese New Year (January 31) quickly approaches, an expected 3.6 billion trips will be made as millions of people from across the country voyage home in what is known as “the world’s largest seasonal migration.” Now this annual migration of people can be viewed on search engine Baidu’s “Baidu Migrate.” China RealTime reports:

The map updates itself hourly and also includes a section that displays and analyzes migration trends to and from major cities. Not surprisingly, Beijing, as China’s capital and one of its most populous cities, was at the top of the charts Monday afternoon for both departures and arrivals. [Source]

Meanwhile, BBC spoke to a number of migrant workers about their migration experience and the difficulty of securing  train tickets to travel back home.

After waiting for hours at a train station ticket booth, Jia Wubin still couldn’t get a ticket with seating. So he had to stand for 17 hours on the train.

“There was even nowhere to stand in the carriage. So I was standing in the toilet,” said Mr Jia. “I didn’t have the chance to sleep at all.”

[…] “It is a brutal experience. There are just too many people fighting online for train tickets at the same time,” said Ms Zhang. “All tickets will be gone within a minute or so.”

In fact, the official train ticket booking website has crashed a few times in past years due to too much traffic. [Source]

Meanwhile, Shannon Van Sant at Voice of America reports that the New Year migration will likely increase the spread of the H7N9 bird flu:

“If there are mass movements many people are traveling.  The trains are crammed with people.  The planes are full.  People are running around everywhere.  That always bears the risk of transmission of infections,” the doctor explained.

[…] Health officials remain on high alert though this holiday season as the virus continues to circulate and sicken China’s poultry.  The H7N9 virus has infected 96 people in China since the disease was first identified in 2013. [Source]

NPR reports that concerns over the bird flu have resulted in a decline in chickens available for purchase for the upcoming New Year celebration on Friday.

On Tuesday, Hong Kong agricultural workers will begin destroying 20,000 chickens. The bird flu virus H7N9 was found in a single live bird from a farm in neighboring Guangdong Province.

“The Department (of Food and Health) has declared the wholesale poultry market as an infected place,” Hong Kong’s top health official, Dr. Ko Wing-man, said at a press conference on Monday.

[…] Poultry won’t be imported into Hong Kong from mainland farms until Feb. 18 at the earliest. [Source]