AP has details on the latest tensions between Google and China:

The company disclosed in a blog post that it had detected a “highly sophisticated and targeted attack on our corporate infrastructure originating from China.” Further investigation revealed that “a primary goal of the attackers was accessing the Gmail accounts of Chinese human rights activists,” Google’s post said.

Google did not specifically accuse the Chinese government. But the company added that it is “no longer willing to continue censoring our results” on its Chinese search engine, as the government requires. Google says the decision could force it to shut down its Chinese site and its offices in the country.

On his blog, Thomas Crampton posts two documents cited by Google in their decision.

Update: Reuters reports that the U.S. government and Google may have coordinated an anti-censorship message in China:

Secretary of State Hillary Clinton plans to help citizens in other countries, including China, get uncensored access to the Internet, and last week she met top executives from companies including Google, Microsoft Corp (MSFT.O), Twitter and Cisco Systems Inc (CSCO.O), an aide said on Tuesday.

Google separately said it might pull out of China, closing down its Chinese-language google.cn Web site and shutting its offices, because of censorship and a series of China-based cyber attacks on human rights activists using its Gmail service around the world.

Relationships between the world’s two biggest economies have been strained recently over climate change, trade and other matters. China also is the largest lender to the United States, holding around $800 billion in Treasury bills.

– A post from the Chinese Law Prof blog.
– “Google’s China Stance: More about Business than Thwarting Evil” by Sarah Lacy at Techcrunch.
– Secretary of State Hillary Clinton’s statement about Google.
– Perspectives on the developments from Rebecca MacKinnon, Chinayouren, Imagethief, and James Fallows.

Netizens traveled to the Google headquarters in Beijing to lay flowers. The sign below says, “Google: A real man.” 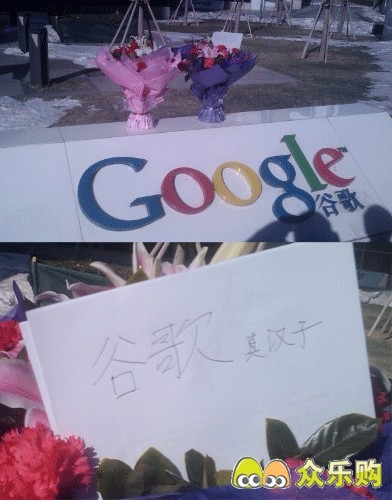 Read translations of selected tweets about Google via CDT.