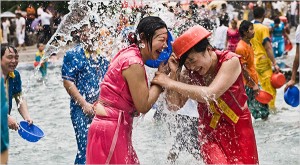 MANZHA, China — Tucked away in China’s steamy tropical southwest are the villages of the Dai people, famous throughout the country for a raucous annual tradition: a water-splashing festival where the Dai douse one another for three days in the streets using any container they can get their hands on — buckets, wash basins, teacups, balloons, water guns… Yuppies from China’s boom cities arrive by the busload to take part in a wild frenzy of dousing and dunking and drenching with 100 Dai women dressed in bright pink, yellow and blue traditional dresses — “our warmest and sweetest Dai princesses,” as an announcer calls them.

“A lot of tourists want to come see this, but it’s only a few days a year,” said Zhao Li, one of the management office employees, who are virtually all Han, the dominant ethnic group in China. “So we decided to make it every day, so everyone can experience water splashing.”

The Dai park, with its wooden stilt homes, groomed palm trees and elephant statues, is part of an increasingly popular form of entertainment in China — the ethnic theme playground, where middle-class Han come to experience what they consider the most exotic elements of their vast nation. There is no comprehensive count of these Disneyland-like parks, but people in the industry say the number is growing, as are visitors. The Dai park, whose grounds encompass 333 actual Dai households, attracts a half-million tourists a year paying $15 each.