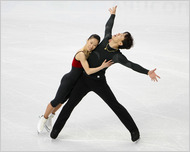 As Wang Meng, China’s champion short-track speedskater, breezed through her first heat of the 500 meters Saturday night, she stayed well ahead of a crash that wiped out a competitor, set an Olympic record, then walked dismissively past waiting Chinese reporters.

Three potential gold medals await her. There was no time to stop and chat. Anyway, before leaving Beijing, Wang, who won the 500 at the 2006 Winter Olympics, had said all she needed to say: “Unless I make mistakes, no one else will have any chance to win.”

No one expects China to dominate the 2010 Winter Olympics the way it ruled the 2008 Summer Games in Beijing. But its Olympic officials are hoping for a breakthrough that could bring perhaps 5or more gold medals and about 15 over all — a significant number given that China has won only 4 previous golds and 33 cumulative medals since it began participating in the Winter Games in 1980 in Lake Placid, N.Y.