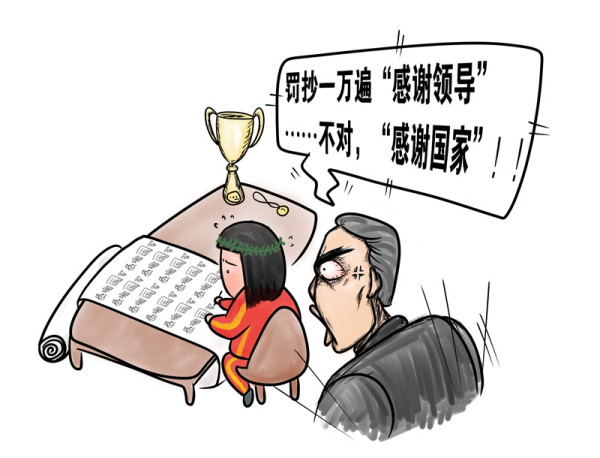 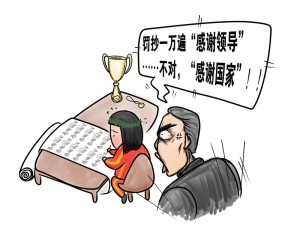 In February 2010, Chinese speed skater Zhou Yang won the 1,500 meter event at the Vancouver Olympic Winter Games. She thanked her parents for their support at a press conference following her win. Yu Zaiqing, Deputy Director of the National Sports Bureau, criticized her for not first thanking her country. Netizens and state media alike balked at Yu’s callousness. The entry about him on the Wikipedia-like Baidu Baike was altered to say that he had “no mother and no father” and was “raised by the Communist Party.” As of November 2017, the first paragraph of the Baike entry describes the 2010 controversy, later noting that he was removed from his position at the National Sports Bureau in September 2011.

Giving “thanks to the country” is now disingenuous praise for an overbearing regime. The phrase can also be used to criticize a state project of minor benefit and substantial cost, or when the government takes small measures to address a problem of its own making:

-meng-lang- (@-梦-郎-): As a Chinese person, you must understand gratitude. First of all, we must give thanks to the country and to the Party. Although many years have passed and the lives of the people at the bottom rung of society haven’t improved, we face greater pressure than before, and happiness is farther from our reach, this could all just be an American imperialist plot…

Fennudezhibei_IRS (@愤怒的纸杯_IRS): Thanks to the country‘s policies… I’m an only child.

See also the netizen term Chinese Thanksgiving (Zhōngguó Gǎn’ēnjié 中国感恩节), or CDT’s translation of a 2008 blogpost titled “To Whom Should I Be Grateful?”