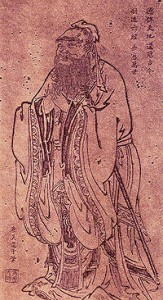 Chinese philosopher Confucius spent most of his life in poverty. But his picture and sayings decorate lottery tickets being sold to luck chasers by a provincial government in Shandong… Chinese websites and newspapers have been circulating remarks that express the indignation of a large section of people, who feel the tickets amount to showing disrespect to the thinker, who has the status of a saint in China. Some said it amount to defaming Chinese culture as a lot of it is based on Confucianism.

Yin Chengli, an official at the lottery centre in Shandong has defended the move saying: “We just wanted to sell tickets while spreading Confucius’ ideas.” The criticism will not deter the lottery program, he said… An online poll by a web portal, Sina, showed that 52.7% opposed the move while 42.5% backing it on the ground that Confucius ideas can actually be promoted through these means.

Lottery authorities have said they will distribute 65 per cent of the ticket revenue as prize money and spend 20% on reconstruction work at the earthquake affected areas of Sichuan province.

Factory Owners and Confucius on the Environment

The Economist in China: Old Hands