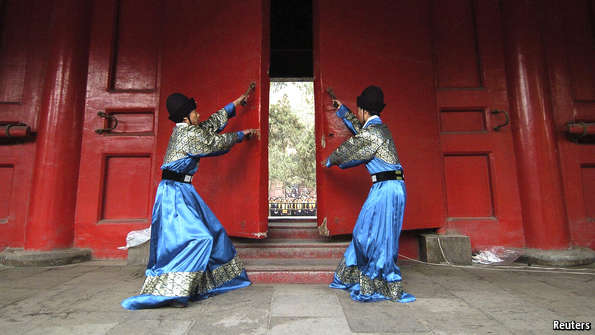 The Economist examines the Party’s ongoing adoption of Confucianism alongside its own heritage as an ideological pillar:

Though the party has quietly been rehabilitating Confucius for some time, under Mr Xi the pace has quickened. In February 2014 he convened a “collective study” session of the ruling Politburo at which he said that traditional culture should act as a “wellspring” nourishing the party’s values. Official accounts of the session made no mention of Confucius, but party literature made it clear that the values Mr Xi spoke of—such as benevolence, honesty and righteousness—were those espoused by the philosopher. In September Mr Xi became the first party chief to attend a birthday party for Confucius (who turned 2,565). China, he told assembled scholars from around the world, had always been peace-loving—a trait, he said, that had “very deep origins in Confucian thinking”. In May state media reported that the link between Marxism and Confucianism, which some might consider rather tenuous, was the “hottest topic” in the study of humanities in 2014.

[…] A few scholars would like Mr Xi to go much further, by setting up a new form of government based on Confucianism. Prominent in this camp is Jiang Qing, who runs a Confucian academy in the south-western city of Guiyang. In a co-written article published by the New York Times in 2012 Mr Jiang proposed that China set up a tricameral parliament. One of the chambers would be led by a descendant of Confucius. (There are plenty of them, including roughly a quarter of Qufu’s population. This correspondent’s taxi driver boasted that he was a 77th-generation descendant.) Another chamber would be made up of “exemplary persons” nominated by scholars steeped in Confucian classics. [Source]

Confucian scholars are divided on the appeal of the Party’s embrace, as Nailene Chou Wiest wrote at Caixin in February:

Some “Red Confucians” envision the dawn of a new era, repeating the momentous act of the Emperor Wu of the Han Dynasty, who decreed Confucianism the state ideology, shaping political and social institutions for the following two millennia. The high priest Dong Zhongshu slyly crafted an authoritarianism with religious attributes out of the Confucian cannon. The modern-day Dong wannabes point out the parallels: it took the Han dynasty some 60 years to put Confucius on a pedestal after the competing ideologies of Legalism and Taoism faded; in modern-day mainland China, after 60 years of experimenting with Marxism and the economic neo-liberalism, the time is ripe for a Confucian revival.

But Confucian intellectuals outside the mainland look at the state patronage askance. Yu Yinshi, professor emeritus of Chinese studies at Princeton, calls it a “kiss of death” because co-opted intellectuals will lose their independence and censor themselves to please their patrons. He contends that in Chinese history, Confucians touched by politics became either the persecutor or the persecuted. […]

[…] Mao Zedong foretold the dire consequences of embracing Confucianism. Despite the usefulness of a pliant conservative ideology for serving a ruling party, he warns that the revolutionary legitimacy of the Communist Party will be at stake if it flip-flops on Confucius. In a conversation with his nephew, Mao Yuanxin, he said: “If the Communist Party comes to the point when it faces overwhelming difficulty and its rule is called into question, turning to Confucius for help means you are at the end of your rope.” [Source]