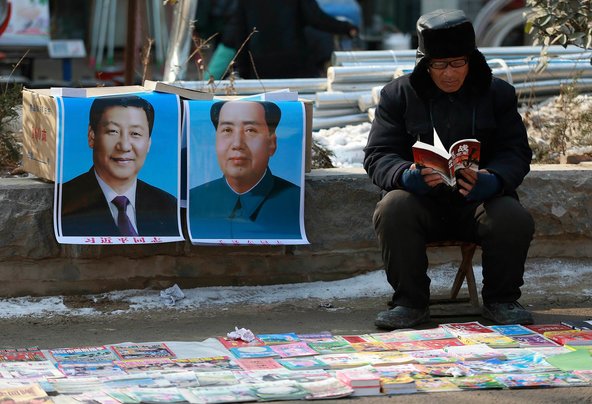 A long-running and unusually crowded discussion at ChinaFile addresses the question “Is Mao Still Dead?” The scholars and experts invited to explain the significance and meaning of the “hard ideological turn” under Xi Jinping include New York University’s Rebecca E. Karl; Columbia University’s Andrew J. Nathan; Sebastian Heilmann of MERICS and the University of Trier; and the University of California, San Diego’s Jude Blanchette.

Karl: Mao is dead. Very dead. The indicator of how dead he is happens to be how much he is now cited as an “authority” for the most un-Maoist of endeavors. […] The invocation and evocation of Mao or Marx in today’s China—whether by Xi Jinping or Yuan Guiren [background]—has nothing to do with Maoism or Marxism, both of which, after all, provide some of the most potent critical positions on capitalism, injustice, inequality, and power. Rather, the invocation and evocation have to do with strengthening a centralized Party apparatus and its political-economic systems of domination, whose waning legitimacy in face of massive and systemic corruption can only be bolstered by ideological contortionism. […]

Nathan: I interpret the revival of Maoism as a sign of Xi Jinping’s political vulnerability. He is engaged in the risky political endeavor of attacking corruption, meanwhile (and not so incidentally) cleaning house of political enemies and centralizing power. We don’t know what his ultimate goals are for using this power – whether to make the political system more democratic, make it more authoritarian, open up the economy further or move it back toward greater state control, make the military less politicized, or more politicized. But in order to do any of these things, Xi has to face the risk of disruption from those inside the political and economic elite who will be hurt by the changes. […]

Heilman: As a repertoire of leadership mechanisms, Mao’s political doctrines and techniques are alive and kicking among China’s cadre elites. They were never dead. They have only been ignored by many Western scholars and journalists who preferred to focus on purportedly unavoidable convergence with democracy, markets, civil society, or rule of law, as we understand them. […]

Blanchette: […] While the recent uptick in Maoist sloganeering by Xi Jinping may be a calculated and cynical move to revitalize the moral legitimacy of the C.C.P., that he even believes it might work, speaks to Mao’s symbolic purchase with some sections of the Chinese population, even if it is “ahistorical referencing,” as Prof. Karl rightly points out.

And so, to me, a more important question is: how many people in China would like to see Mao return from the dead? I suspect that it’s a larger portion of the population than we outside of the country realize. […] [Source]

Another contributor, Harvard’s Roderick MacFarquhar, told The New York Times last month that “as the picture of Mao’s face on the Tiananmen Gate shows, Mao is still the great legitimator of this regime. That’s all they’ve got left.” In a 2013 speech quoted by Chris Buckley at The Times last week, Xi Jinping spoke of similarly high stakes bound up in Mao’s legacy:

As China prepared to celebrate passing from the lunar Year of the Horse to the Year of the Goat next week, Mr. Xi visited Yan’an: the rural stronghold from where Mao Zedong pushed the Communist revolution to victory. And there Mr. Xi returned to the village of Liangjiahe, with its steep, yellow-earth hills and cave dwellings where Mr. Xi grew into adulthood during Mao’s Cultural Revolution, when he, like millions of urban youths, was “sent down” to the countryside.

[…] Mr. Xi has shown no inclination to try to take China back to Mao’s era of a command economy and fervent Communist campaigns. But he has repeatedly said that the party would mortally damage its authority if it abandoned Mao’s legacy.

While Xi may, as many including MacFarquhar have argued, be the most powerful Chinese leader since Mao, the University of Nottingham’s Steve Tsang suggests at Forbes that he has far to go before reaching the same level:

It is easy to see why comparisons to the ‘Great Helmsman’ are being made. The Party has tightened its grip on Chinese society and free speech. The defining policy of Xi’s leadership, after two years as president, is an unrelenting and far-reaching crackdown on corruption among Party officials. The focal point of the clean-up campaign is the fall of former security chief Zhou Yongkang, the most senior leader in Communist Party history to face criminal investigation for corruption.

But the portrait of Xi as a ‘strongman’ figure has been painted with excessive haste. […]

[…] If Xi was really the ‘strongman’ that many claim, he would have behaved in a much more assertive manner over the first two years of his presidency. In dealing with highly sensitive and potentially divisive issues, such as the bringing of the disgraced former Politburo member Bo Xilai to trial and in the investigations into the alleged misdeeds of Zhou Yongkang, Xi has moved with great deliberation. It took Xi over a year to formally arrest Zhou.

[…] In fact Xi’s outward confidence belies an acute sense of insecurity. He feels he needs to exert a high level of control over the Party in order to make the reforms that China needs. He has set out along the long road to reform but progress is slow and he still does not have the power to speed up the journey. [Source]