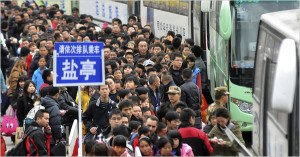 The Lunar New Year, which begins Sunday, is the most important day in the traditional Chinese calendar, and New Year’s-related travel in China is the largest annual migration on earth, with 2.5 billion journeys expected as most of the country’s 1.3 billion people return home. For many Chinese in their 20s and early 30s, though, the prospect of joining their families for the holiday is tinged with dread. Confucian ideals of filial piety entail respect for elders and ensuring the bloodline, and they know they will have to politely endure the nagging of nosy parents who will loudly and frequently wonder why they have not yet settled down and produced a grandchild.

But some Chinese hope to quell the harassment with a little high-technology-inspired deception. In recent years, thousands of “rental lover” ads have popped up on Web sites as young people turn to the Internet in the hopes of hiring a counterfeit boyfriend or girlfriend to fool their families during the high-anxiety visit home. Even more numerous are ads by people offering themselves up as the rented co-conspirator… Chinese in their 20s are the first to come of age under the country’s one-child policy, which only adds to the familial pressure to produce a descendent. Ms. Su thinks duping her parents is worth any accompanying pangs of guilt so she can buy time to develop her career. That said, she dreads becoming what is known here as a “leftover girl” — a professionally successful woman who cannot find a husband.

…Jiang Wenjun, 63, a night watchman at Renmin University in Beijing, provided some insight into the thinking of many Chinese. “In villages, if a girl brings a guy home for Spring Festival before she’s 25, her family saves face,” he said. But if she remains single into her late 20s, “people will think she’s abnormal and gossip that she might have some disease and can’t get married.”

Young men are also conflicted between filial obligation and individualistic impulse. Ma Ying, 24, who posted an ad offering himself as a rental boyfriend, acknowledged that his parents would be disappointed if he did not come home. But he said the potential for adventure was too tempting to pass up.

Translation: The Fall of Commentary to Newspeak

Quip of the Week: No Shortage of Money