On April 22, former Premier Zhu Rongji spoke at the 100th anniversary of his Alma Mater, Tsinghua University. In his speech, the outspoken Zhu made a number of remarks that have since gotten a great deal of attention from Chinese netizens and others, including his statement that, “Every evening from 7 to 7:30, I must watch Xinwen Lianbo (CCTV primetime news) to see what their bullshit is.” From Caijing:

Today in private life, nine years after relinquishing all official duties, Zhu relishes any occasion to speak his mind. He told the Tsinghua audience that he thinks it’s outrageous for the government to subsidize the auto industry. He thinks the money should be spent to provide badly needed, free education for the poor in rural areas. He also blasted the Chinese higher education system. As enrollments have grown in recent years, he said, Chinese universities have allowed too many poor-quality monographs and put up with rampant plagiarism. As Zhu spoke, senior education officials winced nervously.

Sounding like a crotchety old man, Zhu said he watches the CCTV evening news at 7 p.m. only because he wants to see what kind of crap (hushuo) is being aired. The Tsinghua student newspaper and radio station included this comment in their reports but deleted the h-word. But diligent microbloggers relayed his real message.

For many Chinese, history’s verdict matters more than going to heaven or hell after death. Thus, at 83, Zhu seems preoccupied with his historical legacy and wants to set the record straight. The truth, however, is elusive. He may call official media crap, but he’s also deemed dissident literature false.

Ministry of Tofu has much more on Tsinghua’s centenary celebration and Zhu’s comments and reveals that Zhu also recommended that Tsinghua students read “Will the Boat Sink the Water?: The Life of China’s Peasants

,” a book about China’s peasantry that has been banned by authorities:

Zhu Rongji said CCTV’s commentary that China will lead the world in auto-making is bullshit. “Every evening from 7 to 7:30, I must watch Xinwen Lianbo (CCTV primetime news) to see what their bullshit is,” he said. China Central Television is admittedly a mouthpiece of the Communist Party.

Then he harshly criticized Chinese higher education system, saying that the policy of aimless expansion of college enrollment is a mistake, and that the the State Medium and Long Term Program on Education Reform and Development devised by the government is full of empty talk.

At the meeting, he showed one yellow-covered book to the students and strongly recommended it. “The book is praised by many dissidents abroad,” he said. He said the purpose of giving away this book as a gift for Tsinghua students is to encourage them to have critical thinking and judge the book by facts. Will the Boat Sink the Water, subtitled The Life of China’s Peasants, is banned in China since its publication in 2006 for its unflattering and hard-hitting exposure of corruption in politics and life of downtrodden Chinese peasants. 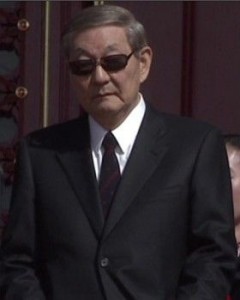 (A rare photo of a graying Zhu Rongji)

Liu Yu: How to Be a Chinese Democrat