How a Communist Party Propaganda Film Cheated at the Box Office

How a Chinese Communist Party film cheated to become a box office hit:

The following three pictures are actual movie tickets for the Chinese Communist Party film, Beginning of the Great Revival, but were modified and used for three entirely different movies in order to boost the film’s box office numbers. Chinese netizens uploaded these pictures onto a microblogging site as evidence. Comments translated by CDT:

It’s only grossed RMB 300 million after cheating so hard? Seriously, if I were the director or the relevant departments, I would rather die instead–the number is such a shame considering how bold they have been and how much they have cheated!

@luozhiyuan: [stealing box office] No matter what movie you will be watching, you’ll only get tickets for Beginning of the Great Revival, and all your tickets will be later modified manually into the ones you actually want. In this way, the records will show Beginning of the Great Revival instead–this is called “stealing the box office.” There are pictures to prove it!
﻿ 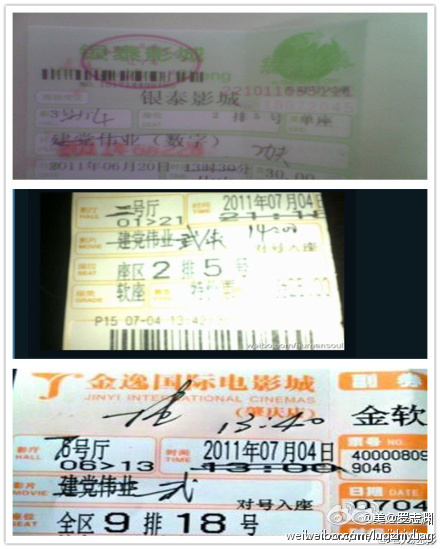