After giving a keynote speech at a World Economic Forum in Dalian, Chinese Premier Wen Jiabao paid visits to several communities, markets, and an employment services center on September 14. During his visit, Wen mentioned the rising pork prices and pledged further price regulation measures. From Xinhua:

Wen expressed his concern about surging prices during his visit to two retirees’ families and said that the government was looking at ways to encourage pig-raising to stabilize the price of pork, the country’s staple meat.

[…] During a meeting with representatives of local food companies and retailers, Wen discussed with them about the causes of the price hikes and measures to stabilize prices.
He said rising costs of pig raising and fewer small-scale pig farms, a key supplier of pork, had both contributed to the surge in prices.

Wen’s quote was re-posted on the microblog of a Chinese magazine on September 17:

@New Weekly: Wen Jiabao:  I am very worried about the current high commodity prices. The government is trying to find ways to encourage farmers to raise (more) pigs. (via Xinhua.net) 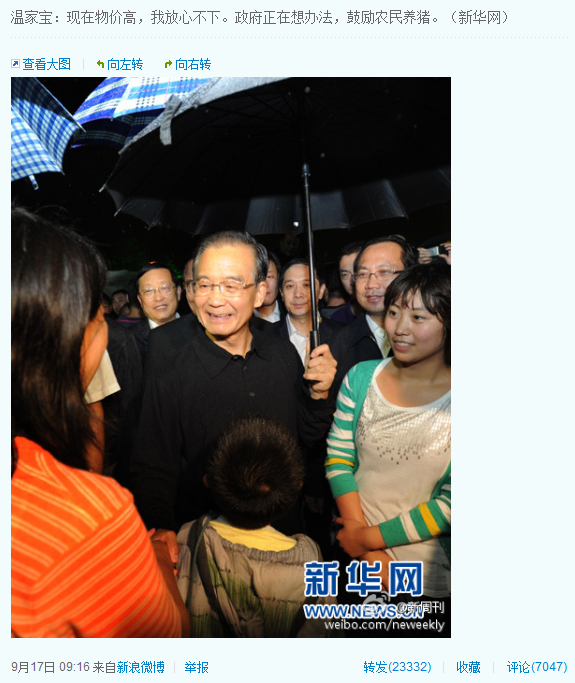 This tweet has generated over 7,000 comments and tens of thousands of reposts, especially during the October 1st National Day long weekend, all containing the same sentence:

We taxpayers have been raising pigs [ie government officials] all along!

The implication of the response is: We taxpayers have been paying money to feed government officials for 60 years, when will they start taking care of us?

Following are some screenshots of the comments: