Officials in Guangdong have reversed plans to ease the province’s family planning policy and allow certain couples to have two children. From China Daily:

A document on family planning in Guangdong’s 12th Five-Year Plan (2011-2015), which will be issued soon, states that a low birth rate is to be maintained, said Zhang Feng, director of the provincial population and family planning commission, in Nanfang Daily on Sunday.

In July, Zhang said the provincial authorities had applied to the central government and were waiting for approval to lead the country in relaxing the family planning policy.

If the application was approved, couples in which either the husband or wife is an only child would be allowed to have a second child, he said in July.

According to Zhang then, the province had room to relax the one-child policy, which has been in place for more than three decades, because such a move would not lead to a fast increase in population, largely due to the increased costs of giving birth to and raising children.

An AFP report points out that it is unclear whether Guangdong had completely scrapped its plans or whether Beijing had rejected them.

The book, titled, “Footsteps of Growing Up” shows some almost pornographic images of a couple engaged in sexual activities. Some parents see such ‘blunt’ and ‘influential’ teaching methods as being a constructive step forward in educating China’s youngsters about the ‘facts of life’. However, alerting those so vulnerable, curious and easily-influenced about such intriguing and fascinating issues will surely only encourage them to experiment with, and even re-enact what they are discovering at school.

My four-year-old-son has already been asking me questions about how babies are made. This is a natural query many young children make as they start to become inquisitive about their own bodies and notice the differences between the genders. Adopting an honest attitude to such questions is important. However, we need not go into the same graphic detail that we find in the illustrations in China’s explicit new textbook, “Footsteps of Growing Up”. More important than how parents educate their children about sex is the fact that parents themselves should do the educating, not a teacher in a biology lesson. It should not be a school’s right or responsibility to inform children about issues of a sexual nature. That is the job of the parents. 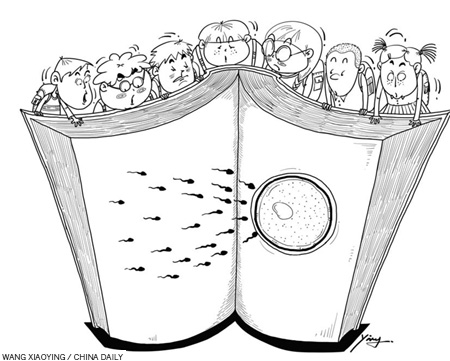 Meanwhile, at the upper levels of China’s education system, a series of regulations made public in September mandate sexual education for university students. From the People’s Daily:

Nowadays, though many college students are mature physically, they lack mental maturity, which leads to misunderstandings about sexual knowledge and sexual psychology.

Most of the college students adopt an inclusive and accepting attitude. Some 88 percent of students think one should be responsible for his or her sexual behaviors, while many students are not familiar with the consequences of pregnancy and the damages to a woman’s physical and mental health caused by artificial abortion.

During an activity in which free abortion services were offered to pregnant female college students launched by a hospital of another city, the hospital received about 50 phone consultations and did operations for 28 matched girls aged from 18 to 23. For most of the girls it was the first time, but other girls have had an abortion three or four times. Many college students do not understand that the abortion operation can cause permanent damage to uterus and infections in reproductive organs.