In Syria, violence has escalated in an uprising against the government of Bashar al-Assad, including a recent shelling by Assad’s forces in Homs that reportedly killed up to 300 people. In response, the U.N. Security Council put forth a resolution calling on Assad to give up power. China and Russia vetoed the resolution. From the Los Angeles Times:

“Assad must halt his campaign of killing and crimes against his own people now,” Obama declared before the vote, reacting to accounts of an overnight shelling in the restive city of Homs that opposition activists said left at least 200 people dead. “He must step aside and allow a democratic transition to proceed immediately.”

Instead, the veto by Russia and China threw a lifeline to Assad, whose family has ruled Syria for more than 40 years through deft manipulation of regional intrigues, an essential skill for a nation in a volatile region, bordering Israel, Iraq, Turkey, Lebanon and Jordan.

The vote would seem to signal a death knell for the Arab League’s peace road map, hammered out during months of negotiation. There is no other pending peace plan.

That leaves the United States and its allies with few options for halting the bloodshed. The U.S. and Europe have already imposed a variety of economic sanctions on the Assad government. But observers say Assad is convinced his regime can survive the sanctions regimen, despite the country’s steep economic downturn since protests began.

Other UNSC members, including the U.S., were quick to condemn the veto. From Zee News:

“Any further bloodshed that flows will be on their (Russia’s and China’s) hands,” [US Ambassador to the UN Susan Rice] said.

US Secretary of State Hillary Clinton said the failure to condemn al-Assad increased the risk of more bloodshed and civil war in Syria.

“If we do not begin the process, I know what will happen: more bloodshed, increasing resistance by those whose families are being killed and whose homes are being bombed, and a greater likelihood that Syria will descend into civil war,” Hillary said.

Assad’s regime was widely condemned for the recent shelling of the city of Homs, which was one of the most violent episodes since the uprising began almost a year ago. AFP gives more background:

The reports described horrific scenes in a city that has suffered most from recent violence, but not previously experienced a bombardment on this scale. Homs is divided almost in two, with Alawites, who are loyal to the regime, on one side and Sunni Muslims, who want to oust Assad, on the other.

President Obama condemned what he called “the Syrian government’s unspeakable assault against the people of Homs”, saying in a statement that Assad “has no right to lead Syria, and has lost all legitimacy with his people and the international community”. Obama accused Syria of having “murdered hundreds of [its own citizens], including women and children”, and called for international co-operation to get rid of the Syrian leader.

The French foreign minister, Alain Juppé, said: “The massacre in Homs is a crime against humanity, and those responsible will have to answer for it.”

The Guardian spoke to witnesses:

Residents of Homs contacted by the Observer were in a state of shock. “They used mortars against civilians,” said Fadi, who lives in the city, in a phone call. “When they have arrested people and committed various crimes over the past year, we could perhaps understand that, even find justification for it. But not this. This is something new and evil.

“The number of dead is now around 290 persons. We don’t know how to bury them all. We don’t know exactly what to do. The street to the cemetery is completely closed. We have been burying people in the gardens, the public parks, but now we can’t get to them.

The Chinese government, for its part, reiterated Syrian government statements denying the shelling. From a Xinhua report:

“The pictures of the dead bodies, which were shown on the channels of incitement, were actually for the victims who were kidnapped and killed by armed groups and then shown on TV to place the blame on the government,” said the source.

The source charged that “these media channels have partnered with the armed groups on ground and the opposition abroad to launch a hysterical mobilization campaign against Syria to influence the positions of some countries in the UN Security Council.”

Cartoonist Hexie Farm has given his view of the UNSC veto: 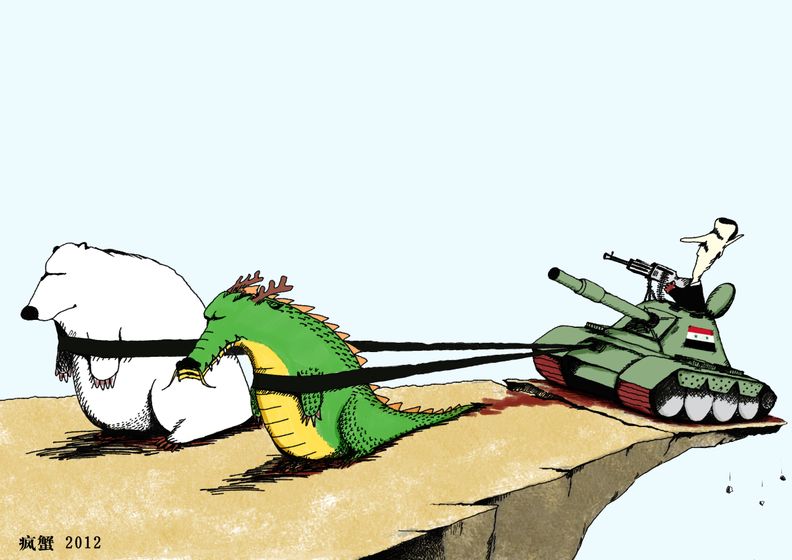