On Sunday protests against Japan in dozens of Chinese cities entered the second day and were marked by violence with many participants calling for war. Protesters have taken to the streets to condemn the Japanese government’s planned purchase of the disputed Diaoyu Islands (known as Senkaku in Japan). From Reuters:

In the biggest flare-up in protests over East China Sea islands claimed by China and Japan, police fired tear gas and used water cannon to repel thousands of protesters occupying a street in the southern city of Shenzhen, near Hong Kong.

The protests erupted in Beijing and many other cities on Saturday, when demonstrators besieged the Japanese embassy, hurling rocks, eggs and bottles, and testing cordons of police.

Demonstrators looted shops and attacked Japanese cars and a restaurant in at least five Chinese cities. Protesters also broke into a dozen Japanese-run factories in the eastern city of Qingdao, according to the Japanese broadcaster NHK.

As protesters targeted Japanese-owned businesses and products, a Panasonic factory and a Toyota dealership were set on fire. From Bloomberg:

Smoke and flames were reported as coming from Panasonic’s electronic-parts plant in eastern Shandong province’s Qingdao city, said Atsushi Hinoki, a Tokyo-based Panasonic spokesman. Keisuke Kirimoto, a Toyota spokesman, said an auto dealership in the same port city was damaged, and the company was checking for losses in other cities.

[…] “I intend to strongly demand that the Chinese government ensure security” of Japanese citizens, Noda said today on public broadcaster NHK’s “Sunday Debate” program. “I strongly object” to the burning of Japanese flags and the protests.

“We want [China] to oversee the situation so that at least Japanese citizens and businesses in China will not be in danger,” Mr Noda told Japanese TV, according to the AFP news agency.

“We will continue to take a resolute attitude. But we will also remain calm. Japan will ask the Chinese side to do the same,” Kyodo news agency reported him as saying.

To complicate an already tense diplomatic situation, the newly-appointed Japanese Ambassador to China, Shinichi Nishimiya, died today in Tokyo three days after he collapsed on the street.

While the security presence is reportedly very heavy around the protests, observers have noted that security officers are not preventing the protests. From Reuters:

Rows of paramilitary police lined the perimeter of the embassy in Beijing as police let protesters in groups of up to 100 walk past the building. Many protesters threw items such as water bottles, bananas, tomatoes and eggs at the embassy and chanted slogans asserting that the disputed East China Sea islands, which are controlled by Japan, are Chinese. Dozens carried portraits of Chinese revolutionary leader Mao Zedong, and one man draped the Japanese flag over his dog.

Anti-riot police stood on nearby streets, and around 20 of their vehicles were parked behind the embassy.

Hong Kong broadcaster TVB showed footage of police firing tear gas at protesters in the southern city of Shenzhen. A man in the city’s Public Security Bureau said he had no information on that. The PSB’s social media account asked citizens to “express patriotism in a rational, civilized and law-abiding way.”

In Shanghai, hundreds of protesters across from the main gate of the Japanese Consulate chanted and waved banners. About 50 paramilitary police officers wearing helmets and carrying shields stood outside. Police cordoned off the street and were allowing people to protest in groups of 50 for about 5-10 minutes before escorting them away.

These photos of the protests outside the Japanese embassy in Beijing were posted by Stephanie Klein-Ahlbrandt: 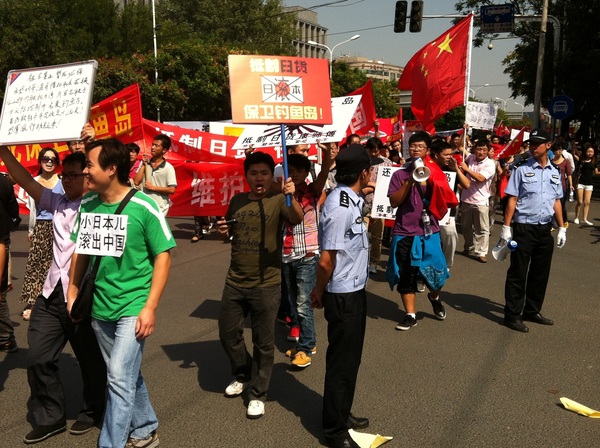 Jordan Pouille has taken many more photos of the protests in Beijing.