Four more Tibetans set themselves on fire in protest on Sunday and Monday, bringing the total number of self-immolations since 2009 to 85. The most recent cases have been documented by Phayul:

The young Tibetan man has been identified as Wangyal, a student of Sertha People’s Middle School.

[…]
Wangyal’s condition and whereabouts are not yet known although eyewitnesses say his entire body was engulfed in flames and he could have suffered major injuries.

Wangyal is around 20 years of age and an orphan. He has three brothers and one sister.

According to various sources, a large number of local Tibetans gathered to carry out the last rites of Sangay Dolma.

Kunchok Tsering, 18, passed away in his self-immolation protest today in Amchok region of Labrang, eastern Tibet. He carried out his protest near a mining site in the region, the same place where Tsering Dhondup, 35, father of three, passed away in his fiery protest on November 20.

According to reports, monks of the Amchok Monastery and a large number of local Tibetans are currently gathered at the deceased’s home to offer prayers.

Kunchok Tsering is survived by his wife, Sangay Tso, 19 and parents Phagkyab, 40 and Gonpo Tso, 37, and an elder brother.

A group of exile Tibetans from Luchu identified the Tibetan self-immolator as Gonpo Tsering, 24 years of age and father of three children, all below the age of six.

“Martyr Gonpo Tsering set himself on fire in front of the main prayer hall of the Ala Deu-go Monastery in Ala region of Luchu at around 6 pm (local time) today,” the group told Phayul citing sources in the region. “While engulfed in flames, he raised slogans calling for Tibet’s freedom, human rights in Tibet, and the return of His Holiness the Dalai Lama from exile.”

Gonpo Tsering succumbed to his injuries at the site of his protest.

After today’s self-immolation, students were photographed holding a banner in solidarity with the deceased:

Human Rights in China has translated selected Twitter posts by Chinese commenting on the self-immolations.

RangzenAlliance has published a map of all self-immolations up to November 22. As the number of self-immolations escalates, authorities in Tibet have vowed to intensify a crackdown on separatism. From AFP:

On Saturday Sichuan Communist Party head Wang Dongming called for a further intensification of the crackdown in a speech in Aba, the provincial government said on its website.

“Our struggle with the Dalai (Lama) splittist clique is long-term, arduous and complicated. In fighting separatism and upholding stability we can never relax our work in the slightest,” Wang said.

“We must strengthen and be innovative in accordance with law in our management of the monasteries and unite the people in the common task to fight separatism and maintain stability.”

The Tibetan government-in-exile in the northern Indian hill town of Dharamshala has expressed “deep concern over the alarming escalation in self-immolations by Tibetans inside Tibet”.

Meanwhile, in Gonghe (Chabcha), Qinghai, several students were reportedly severely injured when police cracked down on a protest at a medical school. First-hand reports of the protest and subsequent crackdown are scant but exile groups have pieced together some details. From the Dharamsala-based Tibetan Centre for Human Rights and Democracy:

On 26 November, at around 9 am (local time), the protest erupted after ten-point questionnaire was distributed among the students at the medical school in Chabcha town of Serchen County in Tsolho (Ch: Hainan) Tibetan Autonomous Prefecture, Qinghai Province.

The questionnaire required students to fill up answers to ten questions such as “What is the nature of self-immolation?” and “What are the consequences of illegal demonstrations and gatherings?”

The questionnaire also asked, “Will bilingual education system weaken the language and letters of nationalities?” or whether there was “a conflict between protection of traditional system and modern development?” Students were also required to answer such trap questions as “Under whose leadership the equality of nationalities became a reality?”

While explaining the contents of the questionnaire, students were given lectures, which included offensive remarks and baseless allegations against the so-called “Dalai splittist clique.”

The protest began as students called for “equality of nationalities”, “language freedom”, “respect for truth”, and the “establishment a new government”, sources told TCHRD quoting local Tibetans in the area.

And from the Guardian:

Free Tibet said more than 20 of the youths were taken to hospital after a demonstration by 1,000 students, mostly from the Chabcha Sorig Lobling school in Gonghe, known to Tibetans as Chabcha, in Qinghai province. It believed four of the patients required emergency treatment.

Free Tibet said it was unclear what had happened after security forces arrived at the student protest. It added that the authorities had sealed off the area and barred parents and residents from contacting those inside the school, citing unnamed sources.

The reports could not be verified independently.

The following photos, of the document distributed to students which sparked the protests, and of protest banners in Gonghe, are being distributed online: 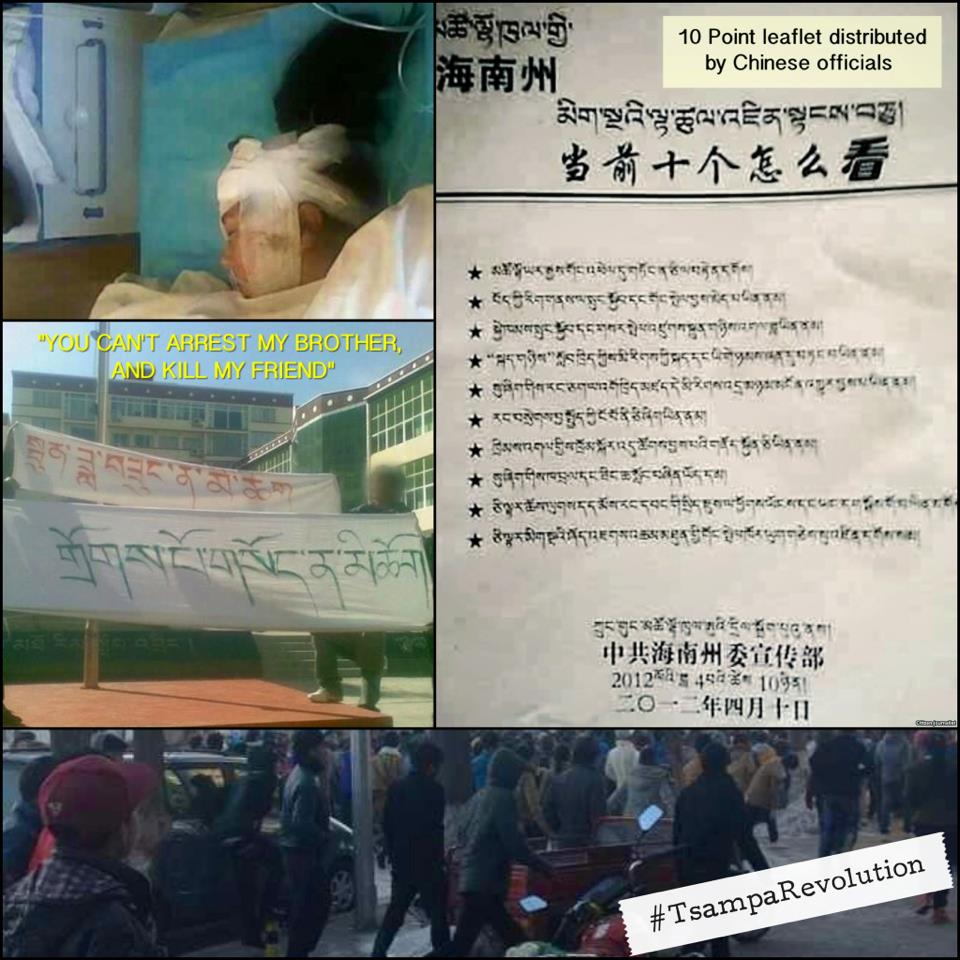 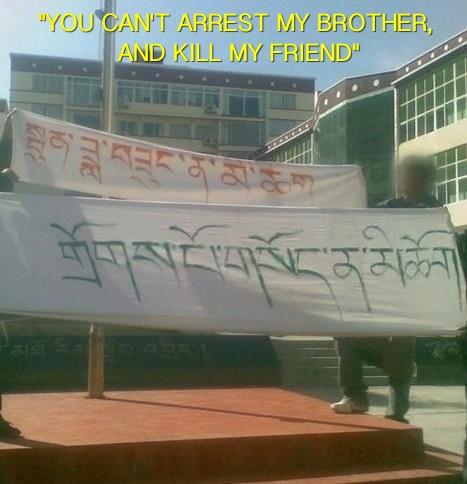 VOA has footage of the protest: