Is the Most Famous Peasant a Dictator?

Wu Renbao, the Party chief of Huaxi Village, died of lung cancer on Monday, stirring up a debate over his dictatorial policies that created one of China’s leading rural economies. From Amy Li at South China Morning Post:

When China adopted capitalism in the 1980s, Wu, then a local party secretary, promptly switched the village economy from agriculture to manufacturing and trade. It subsequently developed into one of China’s most successful economies.

[…] Unlike villagers elsewhere in China, Huaxi’s more than 2,000 residents were shareholders in a public company – Jiangsu Huaxi Group Corporation. They earned handsome dividends and shared the wealth with Wu’s family, who ran the business and managed village affairs.

[…] But unlike shareholders in other corporations, villagers lose their shares and benefits if they leave Huaxi. This was condemned as “unfair”.

Wu’s son and successor, Wu Xieen, is the now village party secretary and chief executive of the Jiangsu Huaxi Group Corporation. Wu’s sons control 90 per cent of Huaxi’s wealth, while his family members occupy most of key positions in the village government, said media reports.

Chinese official media, on the other hand, did not question Wu’s style of leadership, nor did they question the fake cover photo of Wu on Time magazine. From Barry van Wyk at Danwei:

In their fulsome praise of Wu Renbao today, China’s newspapers all mention that he made the cover of Time magazine in 2005. So I went looking through all the covers of Time magazine in 2005 and came up empty-handed. It was then, however, that I discovered that the newspaperNew News (新消息报) from Qinghai province had kindly printed the said Wu Renbao Timecover, inadvertently revealing that it and all the other Chinese newspapers had been embarrassingly duped by a blatantly fake Timecover. It boggles the mind how this newspaper didn’t notice its terrible mistake, with the fake cover being such a nut job of nonsensical grammar. The fake Wu Renbao cover, it emerged, was in fact ripped off of thisTime cover from January 2006. This fakery has already been reported on Weibo today (e.g. here or here), and elsewhere on the Chinese Internet.

Yet before we completely dismiss New News as a sorry excuse for a newspaper, it would probably be remiss not to mention that this snafu (as with everything else related to Chinese news reporting) was likely first propagated by Xinhua itself. Looking back at the paper trail of news reports yesterday, it does appear as ifXinhua was first with publishing a story of the news of Wu’s death and the claim that he appeared on the cover of Time magazine in 2005 in a report published at around 20:30 last night. As mentioned above, Xinhua had already reported the false assertion on its Weibo account just after six last evening.

Inexorably in China, all news leads back to Xinhua, and then all the rest follow.

The fake “TIME cover” is embedded below: 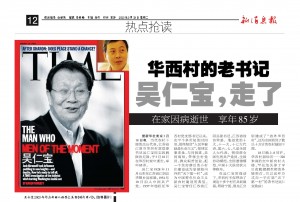