Evidence that H7N9 Spread Between Humans 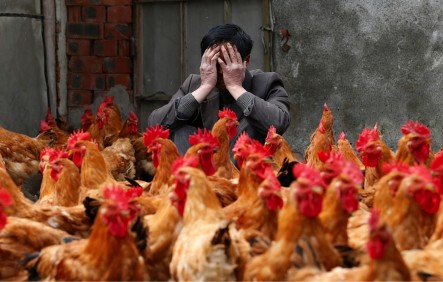 The first reported case of human-to-human transmission of the H7N9 bird flu emerged after doctors found evidence that a father infected with the new strain of influenza virus may have transmitted it to his daughter. South China Morning Post reports:

The 32-year-old woman had no known exposure to poultry before becoming sick as she looked after her father in hospital in Wuxi, Jiangsu. It is understood she did not wear a mask or gloves.

Her 60-year-old father, who fell ill in March, had previous contact with live poultry.

In an article published on Tuesday in BMJ, the British medical journal,Chinese researchers wrote: “We believe that the most likely explanation for this family cluster of the two patients with novel avian influenza H7N9 virus infection is that the virus transmitted directly from the index patient to his daughter.”

[…] With the eight-gene sequence of the two virus samples having a similarity of 99.6 to 99.9 per cent, they concluded that it is the first report of probable person-to-person transmissibility of the new virus. [Source]

The first known H7N9 bird flu deaths were reported in March, with the total number of fatalities rising to 36 in May.

Although it is currently unclear whether the virus is capable of developing sustained transmission among humans, the latest case of human transmission is raising the level of concern about H7N9. From Reuters:

Experts commenting on the research said while it did not necessarily mean H7N9 is any closer to becoming the next flu pandemic, “it does provide a timely reminder of the need to remain extremely vigilant.”

“The threat posed by H7N9 has by no means passed,” James Rudge and Richard Coker of the London School of Hygiene and Tropical Medicine said in a commentary in the same journal.

The scientists who led the study stressed, however, that the virus has not yet gained the ability to transmit from person to person efficiently – meaning the risk is very low that it could cause a human pandemic in its current form. [Source]

Despite praising China for its response to the H7N9 outbreak, The Diplomat’s Alan P. Zelicoff and Jonathan Schwartz question whether China is ready for the next influenza epidemic:

China is justifiably congratulated. However, a healthy dose of skepticism is nonetheless warranted. We should not assume that China will be able to replicate its H7N9 response in the future. The H7N9 outbreak represented a best-case scenario for Chinese epidemic response. The location of the outbreak – Shanghai and the surrounding regions  — is the wealthiest in China, and among the most attractive to well-educated and well trained physicians. Many of China’s top academic institutions with public health programs are also in this region. Not surprisingly, the region enjoys a public health infrastructure and a quality of health care that are exceptional by Chinese standards. Its local CDCs are well equipped and staffed with highly trained specialists. It is therefore not surprising that, once it was detected in the Shanghai region, China was able to effectively respond to H7N9. And yet, given the nature of H7N9 (likely first appearing among poultry in mass production farms in rural areas), it is reasonable to conclude that the influenza first developed in rural areas only then migrating to the cities where it was identified and epidemic response protocols were initiated.

Conditions in China’s rural regions differ significantly from those in urban areas – especially when compared with the Shanghai region. Rural areas generally suffer from lower quality hospitals, physicians, CDC and public health officials. While health care and health insurance have become widely available, coverage is broad, but not deep. Many rural residents refuse to visit physicians even when faced with serious health conditions due to the cost and questionable quality of service. As a result, tracking the progression of a novel influenza in China’s countryside remains quite difficult. And of course, China’s countryside is the likely source of future outbreaks and is home to around 600 million people.

Thus, while China deserves to be praised for its H7N9 response, it would be a mistake to assume that it has achieved effective pandemic response capabilities. The ramifications for China and the international community are far reaching. [Source]