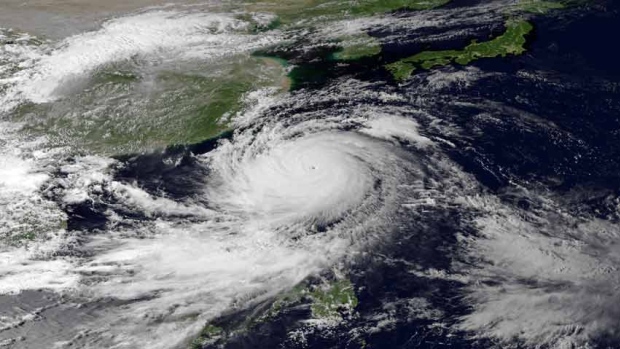 Typhoon Usagi landed in southern China on Sunday after passing through the Philippines and Taiwan and skirting Hong Kong. At least 25 people have died from the storm and more than 300,000 have been displaced. From CNN:

“Usagi has devastated the eastern part of Guangdong,” where it made landfall late Sunday, the state-run news agency Xinhua said.

The storm trashed construction sites, damaged hundreds of homes and cut off power and water, the news agency reported. Twenty-five people have so far been confirmed dead, it said.

[…] The typhoon weakened Sunday as it got nearer to the Chinese coast, but was still packing sustained winds of around 160 kilometers per hour (100 mph) when it hit land. By Monday afternoon, it had faded to become a tropical depression. [Source]

Xinhua has more details on the damage:

The deaths included 13 in Shanwei City, six in Shantou, three in Jieyang and one in Guangzhou, Heyuan and Chaozhou each, said the emergency management office of Guangdong provincial government.

Around 5.5 million people have been affected and 310,000 displaced by the storm. Some 8,490 houses have been destroyed and 50,800 hectares of cropland damaged. The typhoon has incurred direct economic losses of 7.1 billion yuan (1.16 billion U.S. dollars) in the province.

Usagi — Japanese for rabbit — was designated a super typhoon on Saturday after it passed across the Philippines and Taiwan, moving toward the Chinese mainland. Although it weakened on Sunday, winds still reached 162 km per hour when it hit the land in Shanwei at 7:40 p.m. on Sunday.

Usagi has devastated the eastern part of Guangdong, with trees blown down and water and electricity supplies severed. Worst hit was Shanwei. [Source]