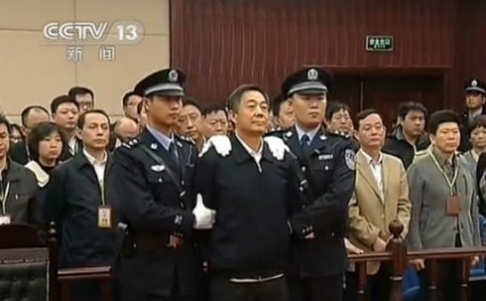 A court in Shandong rejected the appeal of disgraced former Chongqing party chief Bo Xilai and upheld his life sentence on Friday, according to Reuters:

In a brief announcement carried on its Weibo microblog, Xinhua said that the high court in the eastern province of Shandong, where Bo was originally tried, had rejected his appeal. It gave no further details.

Bo’s guilty verdict had been unlikely to be overturned as the courts are controlled by the Communist Party, which had pronounced him guilty long ago.

President Xi Jinping, who took office in March, will have wanted the Bo affair settled because the next few weeks are critical for his government.

At a closed-door party plenum next month, Xi will push for more economic reforms and he needs unstinting support from the party’s elite 200-member Central Committee. [Source]

11.39am: The Shandong High People’s Court releases the verdict on its website: Bo claimed he has written his earlier testimony under duress. He said he was not allowed to cross-examine a key witness, his wife Gu Kailai. He argued that his case is considered serious because his actions led to Wang Lijun’s defection, but Wang Lijun received a more lenient sentence for the very defection. [Source]

See more on Bo Xilai, his trial, and his sentencing, via CDT.