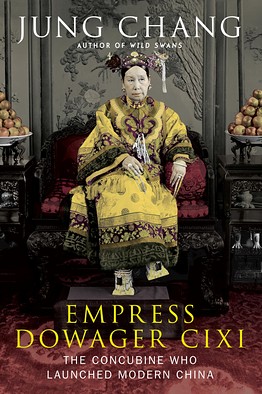 In a video interview with Te-Ping Chen in The Wall Street Journal Asia, Wild Swans author Jung Chang spoke about her new book “Empress Dowager Cixi: The Concubine Who Launched Modern China” and why Cixi is “the greatest woman in Chinese history”:

When people think of Cixi, they often think of the marble boat at Beijing’s Summer Palace, which she reportedly built by embezzling public funds. What do people usually miss about her story?The marble boat wasn’t built by her, it was built by a previous emperor. And actually, she used the marble boat to entertain Westerners, because somehow Westerners took a tremendous interest in the marble boat. So you could say it’s sort of a symbol of her open-door policy. When I first got interested in her, when I looked on the Web and other writings, I was astonished by the gap between the real her and her image. And then I got to be more interested. I don’t want to write things that everyone is saying, telling the same story. I wanted to be able to find new things and have new angles. And she’s a wonderful subject.What were Cixi’s biggest contributions during her rule?She really launched women’s liberation [in China]. And the last project she embarked on, which was unfortunately cut short by her untimely death, was to introduce China into a constitutional monarchy, which means an open parliament with an upper house and lower house, and to give the vote to the Chinese people on the basis of the franchise—comparable to the franchise in the West.Chinese women such as Mao Zedong’s wife Jiang Qing or Gu Kailai have often been demonized. Do you think that Cixi has suffered similar treatment?They can’t even hold a candle to her, they couldn’t even touch her. She is the greatest woman in Chinese history, the most important woman in Chinese history. My book, of course, is going to be about her as a woman, as a concubine to an emperor, and as the absolute ruler of a third of the world’s population. I think there’s a culture of vilifying women, and she started with a tremendous disadvantage because she was a woman. In those days, women weren’t allowed to go out of the house, she couldn’t even see her male officials without a silk screen in front of her. It was from tremendous disadvantage that she changed China.[Source]