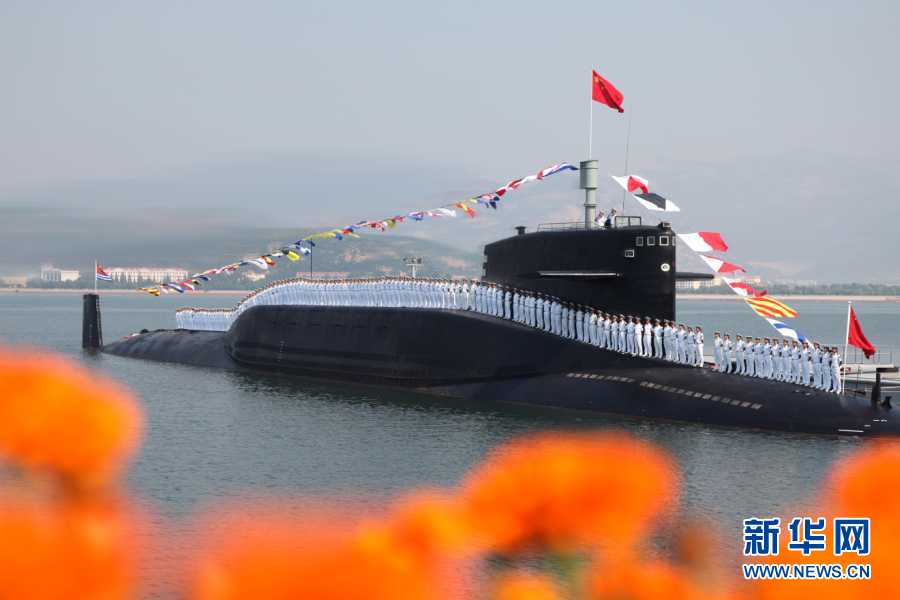 A little more than a year after China’s first aircraft carrier joined the PLA’s naval ranks, China’s bilingual state media has put China’s naval capabilities into the spotlight with a series of articles and broadcast reports focusing on China’s first fleet of nuclear submarines, now 42-years-old. The Global Times reports:

The People’s Daily, the PLA Daily and the China Youth Daily on Monday all carried front-page stories, features and commentaries on the submarine force, applauding its achievements since the launch of China’s first nuclear-powered submarine in December 1970.

According to the reports, the idea of building a nuclear submarine was initiated by Chairman Mao Zedong in the late 1950s to break the global military powers’ “nuclear blackmailing and monopoly.”

[…]Du Wenlong, a military expert, told the Global Times on Monday that the latest publicity shows the maturity in the submarine force’s sea-based nuclear strike capability, and implies progress in the development of China’s new generation of submarines. [Source]

China’s nuclear submarine fleet has had a remarkable safety record for more than 40 years and gained rich experience through rigorous training and drills, its fleet commanders said.

“We are China’s first nuclear submarine force, and the 42 years since our establishment have witnessed our success in avoiding nuclear accidents,” Rear Admiral Gao Feng, commander of one of the People’s Liberation Army navy’s submarine bases, told reporters during a rare open house in Qingdao.

This is a tremendous achievement because almost all of the other naval powers in the world, including the United States and Russia, have had nuclear accidents on nuclear submarines, Gao said. [Source]

Another piece from the Global Times notes that, if any global players were tempted to exploit China’s “peaceful rise,” state media’s recent focus on Chinese naval capabilities could prove strategically deterrent:

Besides being an economic giant, China is powerful in possessing a ­credible second-strike nuclear ­capability. However, some countries haven’t taken this into serious consideration when constituting their China policy, leading to a frivolous attitude ­toward China in public opinion.

Therefore, partly revealing the Chinese nuclear submarine force is in the interests of China. It could strengthen cohesion of Chinese society and enhance a comprehensive understanding of China. There is necessity that China should summarize its efforts in realizing military transparency and keep on moving forward.

For a modern power, there is rare opportunity to input core military power, which is mainly assuming a deterrent role, into practical war. To build the military we need to ensure its actual combat capacity, as well as convert it into strategic deterrence. Being in a sensitive position in the process of a peaceful rise, China will see a growing demand for strategic deterrence.

The current nuclear capability of China and the world’s understanding of it cannot guarantee China’s strategic deterrence not to be challenged. The limited number of its nuclear submarines is not enough to quell the idea of damaging China’s interest in an extreme way. Jimmy Kimmel’s shocking show demonstrates that many people in the West think they can choose to be friendly with China, but they don’t have to be. [Source]

A clip of the Jimmy Kimmel sketch mentioned above, as well as coverage of ABC’s apology for the controversial (and self-consciously juvenile) comedy is available from the South China Morning Post.

The Financial Times also notes that the submarines on display hint at the growing confidence of the PLA:

[Xinhua’s coverage] said the submarines would “gallop to the depths of the ocean, serving as mysterious forces igniting the sound of thunder in the deep sea”, and be an “assassin’s mace that would make adversaries tremble”.

While the submarines displayed on Sunday were the older generation of nuclear vessels that are part of China’s northern fleet – and not the more advanced Jin-class based at the southern Chinese island of Hainan – the display in the domestic media nonetheless reflects the Chinese military’s growing confidence.

“It is still the first time that the Xia class has been discussed in such detail in China’s state-run media,” said Taylor Fravel, an expert on Chinese security at the Massachusetts Institute of Technology in the US. “As China’s military modernisation continues to advance, the PLA has become more willing to discuss its capabilities.” [Source]

Also see a slideshow of the “declassification” of China’s first nuclear submarine from Xinhua [zh]. This torrent of coverage followed an open house that the PLA Navy held for Chinese journalists, and comes amid ongoing tensions between China and Japan concerning the disputed Senkaku/Diaoyu Islands. In August, China’s state media spoke out after Japan unveiled its largest warship since WWII. In late-July, the PLA simultaneously displayed its ground strength and nascent commitment to transparency by holding an open house for journalists at a “secret military base” in Xinjiang. For more on China’s rise, navy, or military buildup, see prior CDT coverage.