U.S. Shutdown: The View from China 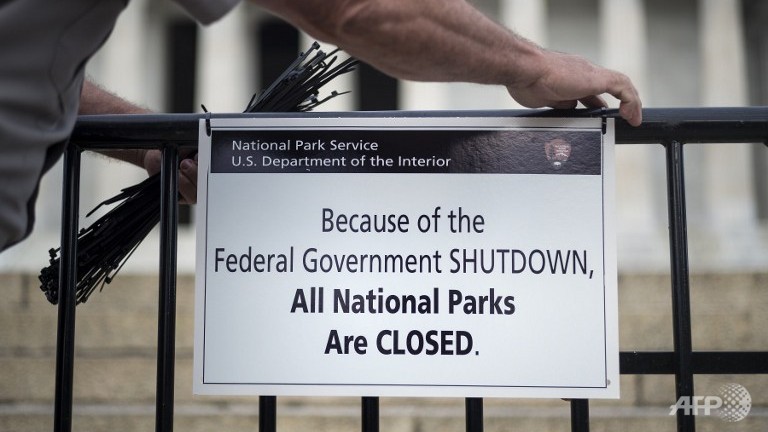 As the U.S. government enters the second day in shutdown mode, citizens and media around the world (and in the U.S.) responded with bafflement and dismay. In China, the government took the opportunity to criticize partisanship in the U.S. From Reuters:

An editorial on the state-run Xinhua news service, considered a channel for Beijing’s official views, said: “The United States, the world’s sole superpower, has engaged in irresponsible spending for years.”

The commentary said the shutdown might lead to the U.S. failing to meet its debt obligations, referring to a similar conflict in 2011 over raising the government’s debt ceiling. While default was ultimately averted, the crisis resulted in Standard & Poors downgrading the rating of U.S. sovereign debt.

“In the view of the latest political failure, a replay of the 2011 summer drama seems likely, which is certainly a concern for U.S. foreign creditors,” it said.

China is the largest single holder of U.S. government debt, a side effect of its managed exchange rate policy, which requires it to purchase massive amounts of dollars from Chinese trading companies to hold back the yuan from appreciating. [Source]

But, according to Liz Carter at Foreign Policy, much of the Chinese official media reacted with less vitriol than might be expected:

Mainstream coverage of the shutdown has been widespread, but its tone has been explanatory, not celebratory. State-run China Central Television covered the developments in a several-minute-long segment entitled, “Republicans’ and Democrats’ Contest Without Result: U.S. Federal Government Non-essential Departments Forced to Close.” Sina, one of China’s major news portals, prepared a dedicated page covering the shutdown (see above), complete with infographics and listicles explaining its causes and consequences. The page’s most febrile headline accompanied a relatively workmanlike article: “Exclusive Analysis: Two-party Government Stalemate Holds America Hostage.” Even an article on the reliably pro-Party Global Times posited that while failure to resolve the standoff before Oct. 15 could have negative consequences for global financial markets, the possibility that this would happen was less than 10 percent.

In Chinese social media, meanwhile, the government shutdown became an opportunity to criticize the Chinese government. Chatter ran deep: the Chinese equivalent of “#USGovernmentShutdown” rose to the second-most discussed topic on all of Sina Weibo, a popular social media platform, as of this writing. Weibo users have commented on the topic more than 135,000 times.

Perhaps predictably, some web users cracked jokes about how trash would pile up in Washington, D.C. and public bathroom closures would present problems for citizens with indigestion. But many took the opportunity to discuss how the U.S. government shutdown reflected on China itself. [Source]

Offbeat China has more on the netizen reaction to the shutdown:

In response to the shutdown news, one netizen 叶落如初 commented: “There is such a severe lack of ‘freedom’ and ‘democracy’ at this evil capitalist county.” Another netizen 樱桃肉丸子的冬天 commented: “The US government shuts down on China’s National Day, I feel like my world view has been put upside down. To beat the US – what we learned on Maoist Theory classes is no longer a day dream.”

Jokes aside, most people expressed disbelief. A government shutdown will never happen in China, at least not under CCP rule. Like in many other cases, Chinese netizens couldn’t help but ponder on what if the same thing happens in China. And the conclusion is that the US has a much better-functioning government. Why? Because the country runs normally even when government operations are shut down.

One netizen 怒一代 commented: “The system in the US is indeed superior. Their government can be shut down without causing any chaos in the society.”

For years, American officials visiting China marvelled at how Chinese leaders could push through infrastructure projects and sweeping legislative changes, without the complications of opposition and the niceties of voting. It always bothered me a bit to hear visitors rave about the efficiency of Chinese authoritarianism, when there was so much they didn’t see—how the government was poorly equipped to hear the demands of its people, how it was captive to the whims of a minority determined to hold on to power. When I got worked up, I suspect I began to sound like a flag-waver.

There were moments on October 1st, in Washington, when I found myself wondering about some of the same problems on this side of the Pacific. How did a system so well designed to absorb the demands of its people become captive to so few? How many times do we get to do this before people start to wonder if we’re still the best place to visit? The best place to study? To work? To stay? [Source]

The shutdown has, in fact, personally affected many Chinese, who were taking advantage of the week-long National Day holiday to travel but instead found many national parks and other tourist destinations closed. From the South China Morning Post:

“I flew so far to get here but there is nothing to see,” a female Henan tourist visiting Washington told China News.

[…] “Why did they pick the National Day week to shut down?” asked another user called Xiaoxiao Zhengzheng on Weibo. [Source]

Some of the consequences of the shutdown may have a more lasting impact, with President Obama forced to shorten his upcoming trip to Southeast Asia. President Xi Jinping is currently on a tour of Southeast Asia, and has met with President Susilo Bambang Yudhoyono of Indonesia. From the South China Morning Post:

The scaling down of Obama’s trip came as Xi held talks with Indonesian President Susilo Bambang Yudhoyono after arriving in Jakarta yesterday afternoon with his soprano wife, Peng Liyuan.

Xi and Yudhoyono vowed to upgrade the bilateral relationship to the level of “comprehensive strategic partnership”, according to Xinhua news agency. Xi also said Beijing would set up a consulate in Bali.

Xi’s first Southeast Asia trip is widely seen as Beijing’s move to showcase its strategic attention on the region, where tensions have been lingering over the territorial disputes in the South China Sea between Beijing and several other countries. [Source]

And for those following the discussions on weibo, Liz Carter has some useful vocabulary tips: