Typhoon Haiyan Through the Lens of China’s 2008 Quake 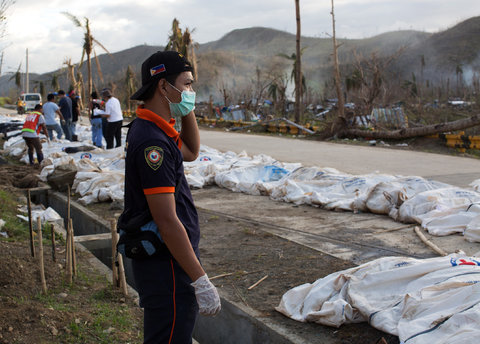 At the New York Times, Austin Ramzy compares China’s 2008 Wenchuan earthquake with the recent typhoon Haiyan that hit the Philippines, with a look at the nature of the disasters and the states’ role in rescue and response efforts:

The storm that hit the Philippines was, in comparison, a smaller affair. The death toll there now stands at 5,235; it is unclear if it will surpass the estimates of 10,000 victims that emerged immediately after the storm hit on Nov. 8.

And yet the typhoon in the Philippines — with the bodies that went uncollected and unburied for days, with the crowds of hungry people waiting by the roadside for aid — somehow felt more disastrous than the earthquake in China that killed more than 10 times as many people.

[…] In Sichuan, limits on access, which included soldiers blocking roads, made reporting on mass graves extremely difficult, and only a few images and lines capturing such scenes emerged in stories in the first weeks after the quake. The extent of such graves came out only later, as in a 2011 story in the official China Daily about a man who tended a graveyard where 6,000 people from the town of Yingxiu were buried.

The huge military presence in the quake zone wasn’t meant solely to thwart coverage. The People’s Liberation Army had key roles in rescue and relief operations. Roads were jammed with People’s Liberation Army trucks. On clear days the air was filled with the sound of P.L.A. helicopters headed for remote villages. Unlike in the Philippines, where complaints about the slow delivery of aid were a daily occurrence, I found just one person in Sichuan who said he hadn’t received enough food. [Source]

Some Twitter users agree with Ramzy’s perspective while others offer a different view:

Chinese response to natural disasters has, on whole, been pretty efficient/impressive. Struck me too when in Philippines.

@austinramzy May also depend on where one was. Sadly I saw many bodies – mostly children – immediately after Sichuan quake.

@taniabranigan Yes, definitely. After a few days it was less common though. That cleanup seemed much slower after Haiyan.