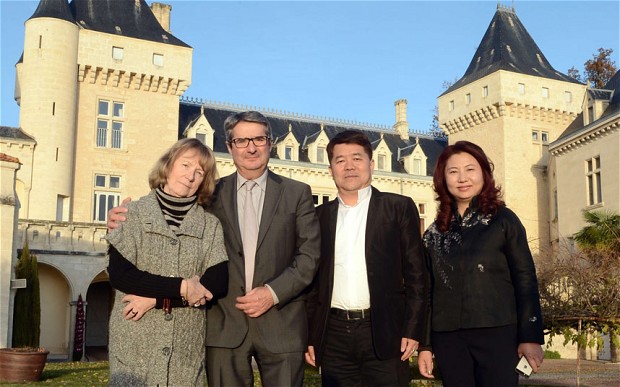 Search and rescue teams in France are still looking for the bodies of Chinese billionaire Lam Kok, his interpreter, and French vineyard owner James Gregoire after their helicopter crashed in Bordeaux. The body of Lam’s 12-year-old son, also a passenger in the helicopter, has been recovered. Gregoire was piloting the flight to celebrate his sale of the 150-acre Chateau de La Riviere to Lam for US$41 million, which marked the biggest Chinese investment yet in Bordeaux wines. From Al Jazeera:

Rescue teams were scouring the Dordogne river on Saturday for the bodies of Lam Kok, who owned the Hong Kong-based hotel group Brilliant, his interpreter, and French wine entrepreneur James Gregoire.

The body of a fourth occupant, Lam’s 12-year-old son, was pulled from the underwater crash site early on Saturday.

Gregoire had sold Lam the vineyard and was piloting the private helicopter when it went down on Friday.

Lam’s wife had pulled out of the flight at the last minute, saying she was “scared of helicopters,” according to a report from the AFP news agency. [Source]

The Financial Times has more on the recently-completed business deal between Gregoire and Lam:

The acquisition was understood to be the first by Mr Lam and his wife, who co-owns Brilliant, outside China. Brilliant includes four hotels in China under the French brand “Relais et châteaux”.
Officials said Mr Grégoire was at the controls of the helicopter when it crashed. Also on board were Mr Lam’s 12-year-old son and a Chinese interpreter. A previous owner of the estate was killed in a plane crash 11 years ago. [Source]

And from People’s Daily:

It was the largest Chinese investment in Bordeaux so far, Xavier Buffo, the vineyard’s managing director said on Friday.

The accident happened in the evening after a press conference announcing the acquisition of the vineyard. [Source]