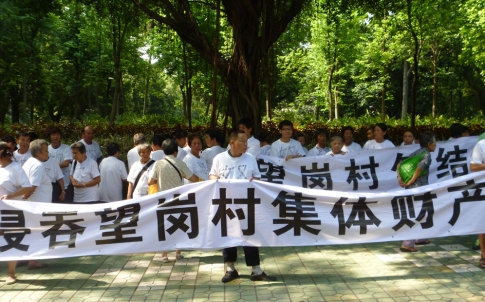 Guangzhou has announced that in order to prevent the flight of corrupt officials, all village heads will be required to turn their passports in to their superiors. From the South China Morning Post:

“In more prosperous and urbanised villages, if we do not beef up our work [on graft prevention] … they will turn into disaster zones of corruption,” agency spokesman Mei Heqing was yesterday quoted by the Legal Daily as saying. Most cases were tied to land grabs carried out amid the accelerating urbanisation programme.

Guangzhou’s new regulation would bring village officials in line with existing requirements for municipal officials and above. They will need to obtain their superiors’ approval for personal and business trips outside the mainland.

[…] Mei said most of the village chiefs brought to his agency’s attention were accused of embezzling funds allocated for land compensation or taking bribes to lease out seized properties at low prices.

Cao Jianliao, the Vice Mayor of Guangdong, is currently being investigated for “serious discipline violations,” which usually refers to corruption. He is one of the highest ranked officials in Guangzhou to be targeted in Xi Jinping’s crackdown on corruption.

More high-ranked officials may become targets as the Central Commission for Discipline and Inspection has asked for superiors to be held responsible for corruption on their watch, according to Reuters:

In an interview with the party’s official People’s Daily newspaper, Li Xueqin, head of the anti-graft watchdog’s research division, said that the party still had a long way to go to hold officials accountable for ignoring corruption.

“We often hear that such-and-such a government leader has been held responsible and investigated for large safety incidents,” Li said, referring to officials being reprimanded for mine disasters or transport crashes which happen because rules have been ignored by underlings.

[…] “This situation has to change,” Li said. “If we discover the leadership or leading officials neglecting their duties on building up party conduct and clean government, we will trace it back to whoever is responsible, and certainly will not let them muddle through as a group.”

Regional governments and other departments will have lists drawn up clearly outlining who is responsible for what, he said, as the government targets an old problem of its orders being largely ignored at the local level.