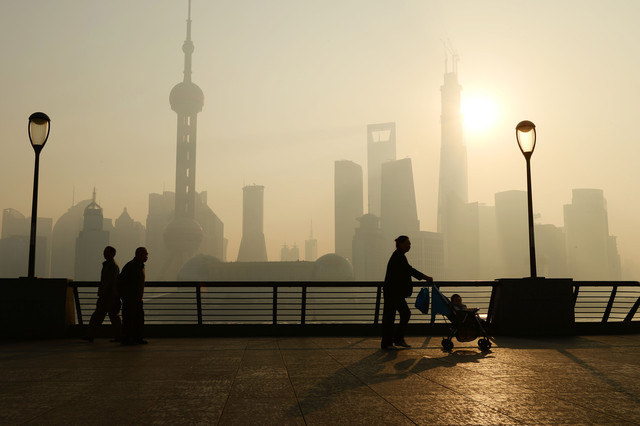 Shanghai has marked the first anniversary of its new air quality index this month by hitting the highest of its six levels for the first time, with AQI scores over 300. From Ke Jiayun at Shanghai Daily:

By 5pm [on Monday], the city’s air had been in the severely polluted zone for 10 hours, making it the worst day for air pollution since the index was launched last December.

The average AQI peaked at 317 at noon, with the highest recording of 329 in Yangpu District.

PM2.5 density stayed above 280 micrograms per cubic meter overnight until 9am, more than 3.7 times the nation’s limit of 75, which made the tiny particles that are hazardous to health the main pollutant.

The density of the larger PM10 particles peaked at 360 micrograms per cubic meter from 8am to 9am, 2.4 times the nation’s limit of 150 micrograms. [Source]

Bloomberg’s Gregory Turk reported on Sunday that children and the elderly had been warned to stay indoors, but that Saturday’s Shanghai International Marathon had taken place as planned as the AQI index climbed past 200:

Heavy pollution may undermine Shanghai’s plans to attract foreign investment and multinational firms, as the city implements a free-trade zone as part of a broader goal to become a global financial and logistics center by 2020. Today’s smog warning comes a day after about 35,000 runners from 84 countries turned out for the 2013 Shanghai International Marathon, according to the People’s Daily newspaper.

[…] “The sky was pretty bad,” said Bridget O’Donnell, a U.S. citizen living in Shanghai who ran in the race. “It didn’t really affect me during the race but toward the end of the race I started to feel a little sick. After the race and today my lungs are really hurting.”

O’Donnell, who also ran in the race last year, said that she noticed other runners wearing face masks for the first time. The marathon started at the city’s historic riverside Bund and wound through the city center. [Source]