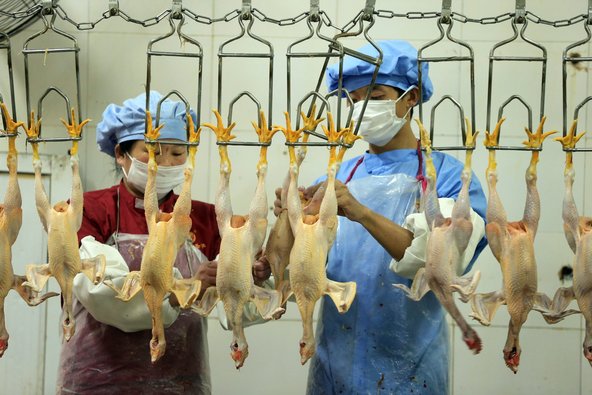 Less than a year after the first human deaths from the H7N9 avian flu virus were reported, at least 286 people have been infected, more than 60 of whom have died—all in China, Hong Kong, or Taiwan. No infections were reported over the summer, but a second and larger wave hit as the winter was beginning. China’s state media continues to report on new infections, and Chinese medical authorities are stressing that the virus seems as of yet unable to efficiently transmit from human to human. China’s health authority has recommended that poultry markets close if any cases of H7N9 are detected, and the live poultry trade has been halted in cities with the highest number of reported infections.

Meanwhile, Reuters reports on H10N8, a bird flu strain previously unknown in humans that has now killed one woman in China and hospitalized another:

The death of a woman in China from a strain of bird flu previously unknown in humans is a reminder of the ever-present potential pandemic threat from mutating animal viruses, scientists said on Wednesday.

The new strain, called H10N8, has so far infected only two people – a fatal case in a 73-year-old and another in a woman who is critically ill in hospital. But the fact it has jumped from birds to humans is an important warning, they said.

“We should always be worried when viruses cross the species barrier from birds or animals to humans, as it is very unlikely that we will have prior immunity to protect us,” said Jeremy Farrar, director of Wellcome Trust and an expert on flu.

“We should be especially worried when those viruses show characteristics that suggest they have the capacity to replicate easily or to be virulent or resistant to drugs. This virus ticks several of these boxes and therefore is a cause for concern.”

Somewhat worryingly, the virus – like H7N9 – has also evolved “some genetic characteristics that may allow it to replicate efficiently in humans”, said Yuelong Shu of the Chinese Center for Disease Control and Prevention in Beijing. [Source]

The first and fatal case of H10N8 infection occurred in December. The second infection was first reported on January 26, and the woman remains hospitalized. The New York Times reports netizen concern over news of yet another potentially fatal bird flu strain, and quotes researchers’ optimism that the new strain won’t prove pandemic:

“So many kinds of influenza viruses, I feel my life will be short,”wrote one person from the southern region of Guangxi on the Tencent Weibo microblog service.

A commentary published in The Lancet on the Chinese researchers’ H10N8 study played down concerns about a widespread outbreak of the new strain:

Does H10N8 pose a pandemic threat? The introduction of a new influenza A subtype into people is always a public health concern. However, pandemic viruses are characterized by high transmission. Sustained person-to-person transmission has not been reported with influenza A virus subtypes other than H1, H2, and H3 viruses, and so far H10 viruses are no exception. [Source]

A report from New Scientist looks at the “mother virus of China’s bird flu,” the lesser known H9N2 virus, and at calls to close poultry markets in many major cities:

Now it seems that all of these viruses stem from a single, mother virus. Targeting it might stop it from spawning new, deadly viruses in the future.

Few people have heard of H9N2, but this virus was crucial in giving rise to the three dangerous bird flu viruses that have emerged so far in China – H5N1, H7N9 and H10N8.

None of these viruses has yet evolved the ability to spread readily in people and potentially trigger a pandemic – although we know H5N1 can, and H7N9 and H10N8 seem similar. But even if those viruses never go rogue, their cousins might, because the real problem is their common ancestor, which endowed them with the genes that make them dangerous.

[…] Shanghai and three cities in Zhejiang Province, the hardest hit by the current outbreak of H7N9, have now temporarily shut their live markets. Officials from one of these cities, Hangzhou, say they want to make the closure permanent, and switch to frozen, centrally slaughtered poultry. Zhang Yonghui, head of the Guangdong Centre for Disease Prevention and Control, told China’s official news service Xinhua this week that the governmentshould switch the country to such industrial chicken slaughter.

That will not be easy. Hopes that the temporary market closures of last spring would become permanent were dashed when consumers demanded their re-opening. […] [Source]

As the H7N9 continues to infect humans and concerns over a new strain emerge, the poultry industry has reportedly requested that health authorities keep news of infections to a minimum. From the South China Morning Post:

China’s poultry industry leaders have asked health authorities to share less information about an outbreak of bird flu, as sales have suffered from an ever increasing death toll.

In open letters, the national association of poultry farmers and their provincial counterparts in Guangxi and Guangdong have as asked local authorities to “stop reporting individual cases of H7N9”, referring to the deadly bird flu strain, according to a report in the state-run Xinhua news agency.

Authorities should “avoid excessively detailed reports” on infections to prevent further damage to the industry, the report said.

Another statement on the website of the National Animal Husbandry Association claimed that identifying the virus as a bird flu strain has brought “disaster” to the industry, leading to losses of more than 100 billion yuan (HK$127 billion). [Source]