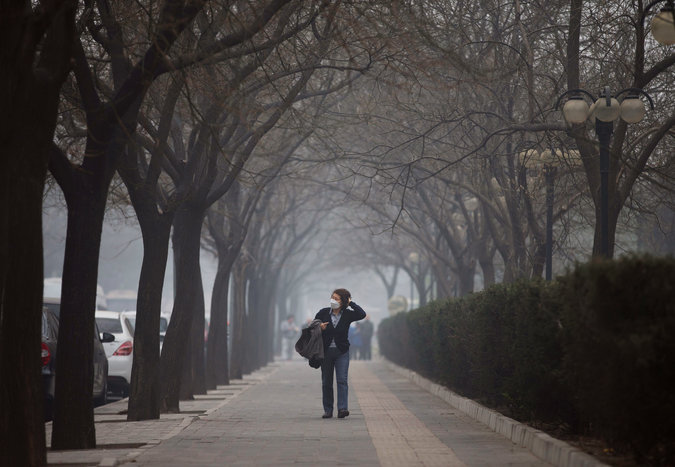 Edward Wong reports for The New York Times on the impact and severity of ongoing air pollution problems affecting mostly everyone in urban China:

On Wednesday and Thursday, the air monitor at the United States Embassy in Beijing rated the air as “hazardous,” which meant people should avoid all outdoor activity. Many cities across northern and eastern China also had poor ratings this week, as shown by figures from local monitoring equipment.

[…] Foreign workers in Beijing are also becoming much less willing to tolerate the toxic air. That was reflected in an annual survey released on March 19 bythe American Chamber of Commerce in the People’s Republic of China. Almost half of the 365 companies in the survey, most of them in the Beijing area, said they had problems recruiting or retaining senior executives because of the poor air. That figure was only 19 percent in the chamber’s 2008 survey.

As a result, some companies are now offering bonuses or higher salaries to fill openings in China, which foreign workers are calling pollution pay — and a few are even announcing the policy publicly, as Panasonic, the Japanese electronics maker, did in mid-March. [Source]

Reuters reports on the government’s efforts to quell the problem as “China’s energy-hungry, high-polluting industries continued to grow too fast in 2013”:

Premier Li Keqiang “declared war” on pollution in a major policy address this month, but China has long struggled to strike a balance between protecting the environment and keeping up economic growth.

Beijing’s mayor promised in January to spend 15 billion yuan ($2.4 billion) on improving air quality this year as part of an “all-out effort” to tackle pollution, though similar pledges in the past have brought little improvement.

Pollution is an increasing concern for China’s leaders, keen to forestall potential unrest as affluent city dwellers turn against the growth-at-all-costs economic model that has tainted much of the country’s air, water and soil. [Source]

Caroline Chen and Simeon Bennett at Bloomberg point to a World Health Organization report which found that “40 percent of the 7 million people killed by air pollution globally in 2012” lived in or near China:

“Few risks have a greater impact on global health today than air pollution,” said Maria Neira, director of the WHO’s department for public health, environmental and social determinants of health. “The evidence signals the need for concerted action to clean up the air we all breathe.”

The findings suggest that air pollution may now be the world’s largest environmental health risk, the Geneva-based organization said in its report. Low- and middle-income countries in the Western Pacific region, including China, had the highest number of deaths per capita, at 172 per 100,000 people, from indoor and outdoor air pollution combined. [Source]