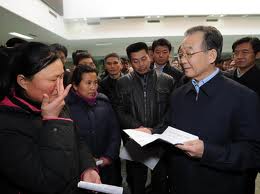 China’s central government has repeated a call last month to better protect petitioners’ rights, warning local governments on Wednesday against “illegal or indirect confinement” and other policies which might “harm people’s interests and hurt their feelings.” Petitioners to the capital are often intercepted by agents employed by their own local authorities, and thrown into official detention centers or illegal “black jails” before being returned home. Xinhua reports:

“Various political and legal organs should further regulate the handling of lawsuit-related petitions, resolutely avoiding blocking the people from normal petitioning by any means,” said a circular released Wednesday by the general offices of the Communist Party of China (CPC) Central Committee and the State Council.

[…] Many complaints are filed each year in China, in which petitioners generally see injustice in land acquisition, social security, education, healthcare or environmental protection.

They can supposedly take their grievances to a higher level if they fail to get satisfactory feedback from local petition offices, but officials often prevent them from raising such cases with their superiors.

[…] According to the circular, petitions concerning injustice in civil, commercial, administrative and criminal lawsuits should be handled by law enforcement organs rather than by general departments of letters and calls, a move to boost efficiency. [Source]

At The University of Nottingham’s China Policy Institute Blog early this month, Samantha Hoffman expressed doubt that the guidelines issued in February would do much to improve the system, at least from petitioners’ points of view:

As with many regulations in China, there can be a huge difference between central government dictates and local government implementation. Whether or not local officials are inherently corrupt, most have conflicting interests. Concerning petitioners, this means keeping the number of incidents reported down, otherwise job performance assessment could be negatively impacted. A report late last year said that petitioners would be de-linked from officials’ performance standards, and that a related pilot study was underway in Zhejiang and Jiangsu provinces; however this was not part of the guidelines issued last week. Furthermore, the issues at the root of most petitions, namely housing demolitions, land grabs and labour, are also issues of contradiction for local leaders. Land grabs, for example, are usually to make room for new construction projects— a main source of revenue for local governments. Needless to say, local government interest tends to be in favour of development projects even if there is a notable social cost. To be truly effective in implementing consultation on a local level to prevent or reduce petitions, many other systemic changes would also be required, which is unlikely in the foreseeable future.

[…] The new guidelines do little in terms of petitioners’ rights protection, although the Party recognizes that it needs to improve on its delivery of social justice. The guidelines’ purpose is best understood if placed in context of the CCP’s social governance policy as it is being developed under Xi Jinping. Social governance is about managing Party cadres’ relationship with the masses and is designed to shape popular demands on Party cadres—the fundamental goal is to ensure the longevity of the CCP’s position in power. [Source]