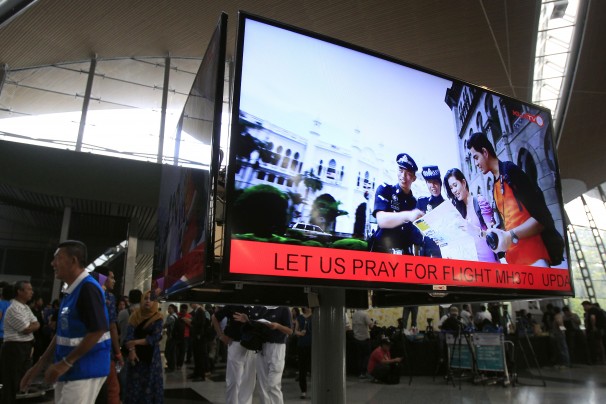 As emergency teams expanded their search on Sunday for the missing Malaysia Airlines flight, the Malaysian government has reported that four passengers “may have boarded with false documents.”  From The Washington Post:

The information about the suspect passengers has led to speculation about terrorism and added to the mystery of Malaysia Airlines Flight MH370, a red-eye carrying passengers from Kuala Lumpur, Malaysia, to Beijing that vanished from radar after midnight Saturday (Friday afternoon EST).

Saturday European officials indicated two of the people on board were using passports that had been stolen in Thailand. On Sunday Malaysia’s transport minister, Hishammuddin Hussein, said Malaysian intelligence officials were also checking the identities of two other passengers, according to The Associated Press.

“All the four names are with me and have been given to our intelligence agencies,” Hishammuddin said, according to The AP. “We do not want to target only the four; we are investigating the whole passenger manifest. We are looking at all possibilities.” [Source]

Meanwhile, USA Today reports that more than one hundred relatives of the missing have gathered at a hotel near the Beijing airport:

“The airline people are better now than they were Saturday, they give us more information about the plane, provide some things we need and always escort us,” said Zhang Hongjie, 44, whose wife Zheng Ruixian, 42, was on the flight.

“She’s passionate, loves her job as an insurance saleswoman and loves traveling,” Zhang said of his wife.

After his wife returned from a holiday in Malaysia Saturday morning, Zhang had planned to take her out for a fancy lunch to celebrate her birthday.Instead, Zhang and his daughter, 18, spent an agonizing day at the hotel awaiting word about the missing flight from Kuala Lumpur that should have touched down at 6:30 a.m. [Source]

Some relatives of the 152 Chinese passengers on the flight expressed anger towards Malaysia Airlines for keeping them “in the dark” while “state media criticized the carrier’s poor response.” From Natalie Thomas at Reuters:

About 20 people stormed out of the room at one point, enraged they had been given no information.

“There’s no one from the company here, we can’t find a single person. They’ve just shut us in this room and told us to wait,” said one middle-aged man, who declined to give his name.

“We want someone to show their face. They haven’t even given us the passenger list,” he said.

Another relative, trying to evade a throng of reporters, muttered: “They’re treating us worse than dogs.” [Source]

Malaysia Airlines is planning a charter flight for Chinese families to travel to Kuala Lumpur to await news, but some families are concerned that the trip will be in vain:

There may be little interest [in the flight], as many are beginning to realize that there will be no more details released in Malaysia than at home, 2,500 miles away.

Guo Qishun whose son-in-law was on the flight, said that few among the Chinese families plan to leave. “No one wants to go to Malaysia. If we go we’ll just be waiting around, which is the same as we’re doing here,” said Mr. Guo, who is from China’s inland Henan province.

Over the weekend, Malaysia Airlines set up rooms designated for expedited visa and passport applications. Families lined up, filling out paperwork and taking photos for passports. With little information coming out of Beijing, many believed that being closer to the airlines’ headquarters might lead them to additional facts they’ve been seeking with every passing minute. [Source]

Families of #MH370 start to organize. Plan to hold press conference this PM behind these doors. Demand gov't help. pic.twitter.com/MjHWf5uLN2

The Wall Street Journal adds that China’s navy has sent two warships to join the search reflecting “public pressure on the leadership to demonstrate a more robust response to threats to the safety of Chinese at home and overseas”:

[…] The search, they said, also provides an opportunity to show that China’ expanding naval power can be used to help neighbors—not just enforce territorial claims that have heightened tensions in the region.

“It’s also a good example of regional cooperation on a multinational rescue operation,” said Zhu Feng, an expert on international security issues at Peking University. “This could be a good model for the future.”

A statement on the Chinese navy’s website said that the Mianyang, a missile frigate that was on patrol around islands in the South China Sea, was directed late on Saturday to head towards the area where the plane went missing. [Source]

See also a propaganda directive on reporting on the plane’s disappearance, and a drawing by Badiucao.